Tom Eure – The Coin, the Prayer & the Crow 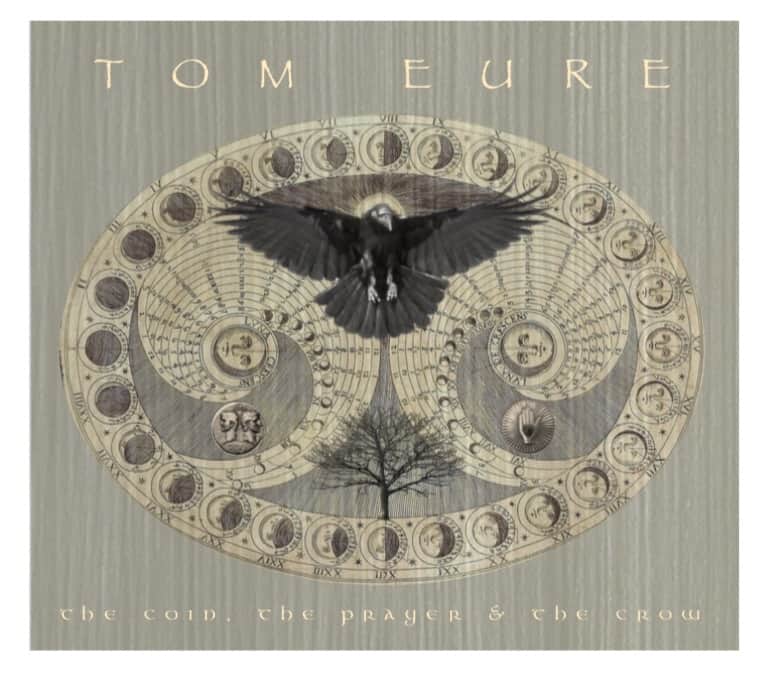 Tom Eure’s sixth solo album The Coin, the Prayer & the Crow is a thirteen song outing that finds this North Carolina headquartered singer/songwriter and master musician working at the peak of his composing and performing powers. It’s a mix of largely vocal numbers peppered with a handful of instrumentals that gives the release a distinct character from the bevy of yearly slate of albums in this style. It bears all the hallmarks of a recording career that has resulted in significant guest appearances on over forty releases and counting – tastefulness, attention to detail, and an ease and confidence of performance that results in the liveliest of possible sounds. Some of the song’s arrangements are a little complex, particularly in their layering effects, but Eure experiences just as much success opting for a stripped bare sound at a number of points on The Coin, the Prayer & the Crow.

He chooses to go with a more expansive approach initially. “The Wind Will Take You Home” is an instant classic reminiscent of other salutatory styled numbers in both Celtic and Appalachian song traditions. There’s absolutely no daylight in this song; everything hangs together with effortless inevitability that makes this performance and song seem like something floating in the ether until Eure felt inspired enough to jot it down. “Yes Please” is the first instrumental on The Coin, the Prayer & The Crow and it’s a satisfying introduction to that facet of the listening experience. The melodies unwind just as naturally in these songs as they do in the vocally dominated tunes and there’s an even more inspired jolt to these songs like they’re played with the attitude of proving a point. The instrumental performances are, uniformly, every bit as compelling as the lyrical driven efforts.

There’s no question, however, that Eure is a first class writer. Any remaining doubt should be swept away after hearing “Song of Remembrance” even once thanks to the careful, measured way Eure explores a gamut of emotions with a judicious and often poetic hand. It’s a slower, less outwardly energetic musical piece than we’ve heard thus far and the restrained pace does a lot of lay a gray, reflective pallor over the song. American history gets a bit of a look with the song “The Best of Thee”, but it’s in micro rather than macro terms and his choice to set the story around powerfully human elements and emotions means it has deeper and longer lasting resonance. The chorus here, as elsewhere on the album, is potent. “All Together Now” promises a boisterous bluegrass number, perhaps, but what we get instead is something much closer to blues and a skeletal musical performance largely supported by Eure’s voice. The album’s longest number and showcase instrumental “Blue Smoke Hills” is full of melodic color suggested by the song title and never wearies listeners despite its extended running time. There’s a sense of spartan beauty reminiscent of “All Together Now” with the closing track “Time With You”, but it doesn’t pursue the same bluesy ends and instead plays as something more commercial without ever sounding like its pandering to any audience. Tom Eure, as always, achieves his ends on The Coin, the Prayer & the Crow without ever having to compromise his artistic vision and our listening experience is immeasurably better for it.