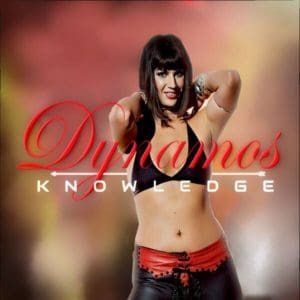 “Knowledge” is an early contender for best rock single of 2018 and continues the rapid ascent of the Los Angeles’ Dynamos. The five member unit is fronted by one of the best singers, regardless of gender, to emerge from rock music in quite some. Nadia E., however, fronts an equally capable musical outfit as this single clearly illustrates. The two guitar monster of Jacob Mayeda and Carlos Barrera provide plenty of fireworks and color for the single, but they play with an effective mix of soulful restraint and aggressive rock riffing while the rhythm section of musical director/bassist Nick Schaadt and drummer Ian Nakazawa lay down a thunderous, challenging groove that nonetheless maintains strict fidelity to the genre’s demands. If Dynamos accomplish nothing else for a listener, they prove there’s plenty of stylistic life left in rock music as they do a memorable job of leaving their own mark on the form, but smarter listener will hear more at work here. Dynamos’ “Knowledge” is an uniquely personal, yet widely accessible, rock song possessing gripping verve that can carry the sound far into the future.

“Knowledge” bristles with life throughout its running time thanks to the production enhancing its strengths across the board. One key thing the production highlights is Nadia’s lyrical inventions and it’s an element of the band’s presentation that might otherwise escape notice thanks to wide eyed admiration of her vocal powers or the hot musicians working alongside her. “Knowledge” has strong subject matter, a pointed style of conveying it, and benefits from a spartan use of the language every bit as musical as other facets of the performance. Her vocal phrasing dramatizes the performance more, maximizing the impact of the song’s lyrics, and gains great luster thanks to her talent for bringing multiple emotions into the mix. Nadia’s singing is definitely one of the critical elements sending this song into the stratosphere, but the band contributes a lot to its ultimate success.

Much of those contributions come from the artistic teamwork shown by the musicians. Guitarists Carlos Barrera and Jacob Mayeda, along with the rhythm section of drummer/percussionist Ian Nakazawa and bassist Nick Schaadt, haven’t been playing together as an unit for that long, but they throw off the same sort of sparks and telepathic unity we hear in the greatest of bands. Chemistry isn’t something born from tenure – much like an individual voice, a collection of musicians either have it or they don’t. There are plenty of long serving bands with a solid, workmanlike sound, but everything Dynamos touch is transformed with genuine inspiration and urgency. Bassist Nick Schaadt deserves particular mention thanks to his role in directing much of the song’s musical development while providing a rambunctious, slinking bass line that’s well defined in the mix. “Knowledge” is the next natural step for this Los Angeles band and opens up countless new avenues for a five piece ready to take over the rock world.