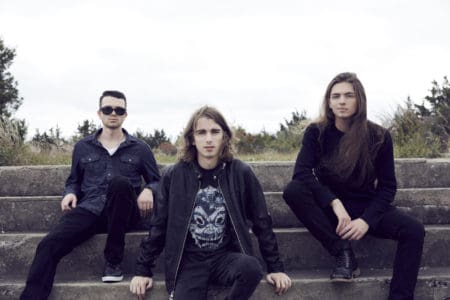 Obscene, the second EP release from New Jersey’s The Gray Vines, features five blistering tunes with clarity of focus and assurance you don’t often hear in a young unit. Fronted by lead guitarist and singer Jake Hoffman, he’s joined by a powerhouse rhythm section of bassist Casey O’Connell and drummer Jordan Bowen, but they aren’t afraid to bring alternative sounds into their typically rock oriented mix. There are suggestions of progressive and avant garde influences that come into these songs at surprising points, but they meld nicely with their rock inclinations and give them a distinct spin they don’t share with many contemporaries. It’s a refreshing twist on the band’s obvious mastery of traditional rock sounds and poises them to be a real mover even in this diminished time for guitar based music.

STREAM EP ON YOU TUBE: https://www.youtube.com/playlist?list=PLaI_AtVMLDCOY1_QxvxzIskBQJnQ0A1sQ

“See Me” is one of the EP’s singles and has an corresponding music video with it that drives home the lyrical point of view. This is all out damn the machine punk rock delivered with a high octane yowl that never sounds crude or studied. Instead, this howl of social dissatisfaction comes naturally and they make work musically and as a statement. The songwriting goes in a more immediately personal direction with the track “Gotta Say” and there’s attitude oozing off the chords of this one. Their work with producer Marc Swersky, as well, is highlight here thanks to the judicious use of post-production effects to accentuate already very solid tunes.

“In Her World” keeps the momentum going with another personal sounding bit of songwriting and some far niftier lines than we’re accustomed to from such tracks. The depth in the band’s songwriting is a welcome and unexpected touch in writers and musicians so young and stands as one of the more impressive qualities setting this apart. Their wont for keeping things pared down to their essence continues with the EP’s title song and it has an especially memorable chorus befitting its position in the track listing. The Gray Vines wrap Obscene up with a great closer, “You Don’t Know”, that bristles with the same attitude and energy we hear on the preceding four songs, but it’s further refined here and its laser focus is a thing for the ears to behold. Obscene is more than enough to carry The Gray Vines past any sophomore slump; it propels them head first into the future like a dart. This is one of the best power trios to come along in many years thanks to their chemistry and obvious willingness to listen to one another; the songwriting caps it all off quite marvelously. This is a wicked good outing that sounds like the product of musical minds far beyond the comparative few years these band members have been at it and it undoubtedly will only get better from here for these young men from New Jersey.