BANAFSH “Soul Man of the East” – A Hopeful Single 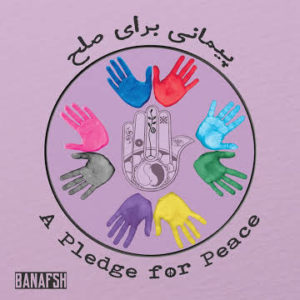 “Soul Man of the East” from Iranian group, BANAFSH is just a start to bridging the western world to the eastern world. Never mind the past, the preconceived biases and notions that the Middle East is in the Dark Ages. BANAFSH, a self-described “electronic world fusion ambient” band takes little time reminding listeners just how alike we really are.

Peace is the answer.

With little fanfare, and even less gadgetry and production, “Soul Man of the East” is a straightforward song. BANAFSH, a nine-piece band out of Tehran, states on their Facebook page that their “mission is to become musical ambassadors of peace.” This song certainly accompanies this lofty goal. BANAFSH makes it sound easy…one song at a time.

“Soul Man of the East” is a track from the forthcoming album, A Pledge For Peace. One can’t knock the band for being razor-sharp focused on their mission! The orchestration and the music bed to this song at first seem subtle. As a listener, it became easy to focus just on the vocals – a male singer with a deep, baritone delivery pleads for one to join the caravan – get on board with peace.

The electric guitar is quite ripe – it channels that hope into a sprite-light harmony. It’s a nice contrast to the baritone vocals. It fits. Listeners might find themselves comparing this track to early 60s folk tunes, a repetitive chorus and easy-to-follow lyrics. Think Peter, Paul & Mary, Joan Baez, The Kingston Trio and even the Nazareth version of “Morning Dew.” What makes me think of this last comparison is the strong electric guitar and purposeful percussion.

What is missing – to compare to 60s Vietnam-era protests is probably the deeper lyrics and bending psychedelic orchestrations. I think there’s an attempt in “Soul Man of the East” but perhaps it’s more of a Western thing to expect those changes and nuances.

I also enjoyed the violin parts. This gives it a real Persian – Eastern flare. I have to refer back to the simplicity of this song – perhaps coming from smaller villages or a rural area, this band captures their own-Americana-esque tune.

I believe this song is more of a live song – like most music, a live performance with a full audience and crowd singing along, the energy really could move mountains. I think hearing it through small speakers – even if it’s through a computer, doesn’t do it justice. This could really be a world-changing song on a live stage and on a grander scale.

I can’t give five stars out of five stars to “Soul Man of the East.” I liked it, but again, it felt like it could be more of a experience live song. It’s not something that when I close my eyes I hear on the radio or a record. I give it four out of five because of it’s message, it’s tight musicianship and opening my world to a simplistic sound.

I will be anxious to hear how “A Pledge for Peace” comes to fruition, and will keep tabs on BANAFSH’s mission to be musical ambassadors of peace.