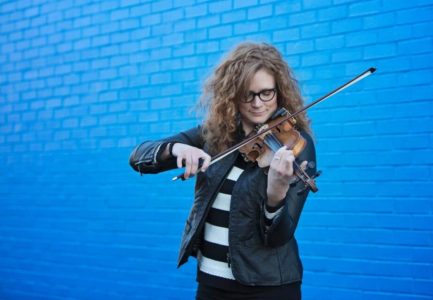 Becky Buller and her band of many, return with Crêpe Paper Heart, the new CD produced and engineered by Stephen Mougin on the Dark Shadow Recording label. Originally from St. James, Minnesota, Buller is a very gifted award- winning bluegrass singer, songwriter, guitar and fiddle player with a writing history including names such as The Infamous Stringdusters. The CD was recorded along with an award-winning line-up of guests, including Grammy and IBMA award winners Rhonda Vincent, Sam Bush, The Fairfield Four, Rob Ickes and more, which includes some vocals by other than Buller herself.

With a lot to be aware of when it comes to what Becky Buller has done in the past, it’s worth looking into beyond this new CD, but there’s also a whole lot to describe about this magnificent recording. The CD opens with the upbeat sounds of “Another Love Gone Wrong” which contrasts the title itself by starting and ending with a very positive vibe for a song about love going wrong. Buller plays fiddle and sings lead vocals, with Prof. Dan Boner providing mandolin and harmony vocals. Also featured are Brandon Bostic on guitar and Daniel Hardin on bass and harmony vocals, with Ned Luberecki playing a mean banjo.

The playing and singing on Crêpe Paper Heart is a must hear, as these are cream of the crop instrumentalists and top-notch singers that anyone would want to work with. “Bitter Springs To Big Trees” shows how quickly they musically progress without vocally digressing. Becky Buller’s lead guitar playing, and lead singing are truly mesmerizing. She’s backed once again here by the great banjo playing of Luberecki, with harmony vocals this time by Frank Solivan. “John D. Champion” finds Buller co-writing with Lynda Dawson about a true WWII pilot story which adds all-the more high-quality songwriting to the CD.

The majestic “Cair Paravel” is an instrumental not to be skipped by any means, because the song named after the castle of the Kings and Queens in C.S. Lewis’ Chronicles Of Narnia, is as good as it gets at any point between the songs. This is a magical piece of work that comes in second or third favorite and still growing after repeated listens to the CD in its entirety. It prepares you for a song about strength, on the spiritually uplifting “Speakin’ To That Mountain.” This is where Buller and co-songwriter Jeff Hyde’s huge talents come together on a song recorded for anyone who’s ever facing a mountain.

“The Rebel And The Rose” is a slice of bluegrass wonder of that Buller co-wrote with Tony Rackley, with Sam Bush singing and playing Mandolin with Buller. This is another high-point on the CD, but there are no low points to speak of either, but if you like vocal duets and gospel-driven bluegrass, you’ll instantly relate to it. Other tracks included are the beautifully written and sung “Maybe” with one of Buller’s finest vocal moments on the CD. And the bonus track, “Phoenix Arise.” An amazing song penned by Lisa Aschmann and Mark Simos, which proceeds went to help rebuild after a fire in the county where her father lives.