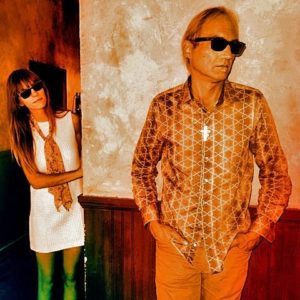 Synthetic stripes of melody drift before our ears, and ticking of a clock reminds us that time is at hand. The pressure is on as the percussion starts to kick in on the club mix of AV Sunshine’s “Time Bomb,” and AV himself doesn’t even have to inform us that we’re going to have to act fast if we’re going to make it to our destination – dance ecstasy – in time. “I’m working on a time bomb, baby” he croons as the song churns and builds towards an anti-climactic release that is reminiscent of neo-mod psychedelia. At once we’re rousted from our seats and pushed into the heat of the volcanic core that is radiating all of these tones, and AV appears to be the conductor of this sinful symphony of noise. Every time it feels like we’re about to go off the rails and into a black oblivion, we’re swung back in the opposite direction whether we’re ready for it or not. This isn’t music for wallflowers – its purpose in life is to remind us that we’re not living if we’re not dancing.

In the second act of “Time Bomb,” we’re washed down a river of emotionally charged harmonies that evoke a response from something other than our already shaking legs. Our hearts become connected with AV’s mini-explosions of lyrics embedded into the music behind them, and if anyone who isn’t engulfed in its savagery should, at this point in the song, be checked for a pulse. AV Super Sunshine lives up to his name in both this track and in its radio remix companion, burning as brightly as the ball of fire that sits high in the sky for about half the day (typically, mind you). Listen to this song enough times and you might start to wonder if the world is flat after all, since every time we reach the halfway point of the track it feels like the earth is collectively trembling beneath our feet. This might be a club song, but its reach extends far beyond the urban atmosphere that it was born to take over.

Towards the conclusion of “Time Bomb,” AV serenades us with the cryptic lyric “Every time I try to self-destruct, you’re always there to rescue me, but now this time let’s leave it up to luck.” In these three verses, AV is alluding to the fact that our ticking time bomb is within moments of detonation, and that maybe rather than trying to fight the inevitable we should learn to love the flames that are about to overtake both us and everything in sight. With a reluctant sigh he seems to withdraw into the ethers around us and let the music take over one last time before the track reaches completion and we’re left to ponder the stirring adventure that we’ve just embarked on. It took me a little while to realize the gravity of what I had just listened to, but once I did I sat down and wrote this review. Sometimes we all need to take a break from reality and explore the universe through the lens of musical wonderment; thanks to these fresh singles from AV Super Sunshine, accomplishing such a feat has become all the easier.