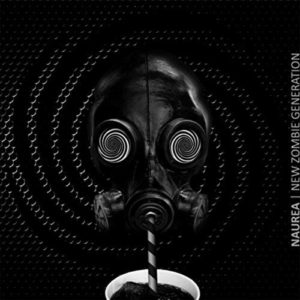 Abel Oliva Menendez has recorded and released music under the moniker Naurea and “stage name” Olimann since the early 2000’s and, nearly two decades on, sounds as witless and unconvincing as ever. His latest collection New Zombie Generation deserves the title Variations on a Theme as Menendez dazes listeners with twelve by the numbers cuts that often can pass as alternate takes on other songs. His understanding of what makes for collar-grabbing, hard-hitting metal/industrial rock/house music is obviously limited and frequently imitative. The wont for imitation extends even to his lyrical content as the songs tend to riff on common themes in this musical style, but his focus from one disconnected image to the next – any chance, however remote, for these songs to connect with their intended audience wrecks on the shores of Menendez’s inability to offer much coherent.

At first glance I must admit the cover art looks a bit amateurish and very over the top dark. What’s more the official NAUREA Logo looks like it was made from Legos. Oh well on to the review..

The first three songs are distinguished by “Welcome to Monsterland”, a particularly brain-dead invocation of some fallen landscape with lame zombie imagery foisted on the lyric without rhyme or reason. The guitar work, brittle and one note, scarcely differs in any of the album’s first three tracks and the slew of effects Menendez weighs the songs down with can’t hide the simple fact that he can’t write a consistent song. You think things can’t get worse and we’ll coast along at the same level of mediocrity throughout New Zombie Generation until “Mama Cadaver” disabuses you of that notion entirely. The morbid idea presumably driving the song isn’t what lowers its value; instead, it’s Menendez’s recurring inability to invoke even a twitch of the inherent gallows humor, however bleak, in this sort of subject matter. It isn’t even good for a lowest common denominator yuck yuck.

The whacked production job damaging “Sleeping with a Ghost” leaves this track beyond all repair and the hodgepodge of ideas structuring its four minutes fourteen seconds running time stamps out any potential it has. “Dead I Am” is another low point in the release with especially painful lyrics bursting with seeming teenage angst. His obvious inability to absorb more than the most superficial basics of this style and then to even poorly reproduce is a real eye-popper. The album’s downward trend continues unabated with the shlock-fest “Fast Food is the New Religion”. It’s one thing if Menendez refuses to take himself or the material very seriously, but the least he could do is write and arrange competently enough we are in on his private joke.

“Game Addicted” is digital noodling pretending to be a composition. Any respectable dictionary will likely define the word “composition” as an assemblage of elements into an organized whole, but there’s nothing assembled or organized in a “song” like this. Instead, it sounds like the equivalent of throwing sonic ideas against the wall seeing what sticks. Substitute the earlier word “ideas” for a more specific noun of your choice. New Zombie Generation’s eleventh number “Holy Boogey-Boogey” is reminiscent of “Fast Food is the New Religion” in the way Menendez epically fails with presumably surefire material, an anti-religious blast of noise, but it doesn’t even match the same abysmal level reached by the earlier tune. Instead, it’s just another furiously nonsensical blast from a non-talent perpetrating musical crimes on an unsuspecting public.