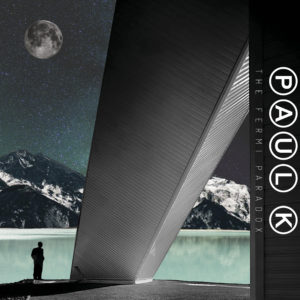 Paul K has just released his new album, The Fermi Paradox. On Anomaly, the album’s initial offering, Paul K is able to involve listeners through contemplative arrangements that unite traditional and electronic instruments. The effort rises and falls, providing ample narration in an orchestral, instrumental format. Sagan, the title’s new single, has a haunting, echoing approach that will stick with listeners long after the effort ceases to play. Utilizing samples from Carl Sagan, the past, present, and future are tied together inexorably.

Ecce Homo brings in a bit more progressive rock into the mix. With a bit of fuzz, the borders between the strings, drums, and bassy elements are blurred. At the periphery, there are hints of choral voices and the human experience – the effort is imprinted with nods to new age music.

On the titular effort, Paul K weaves a haunting piano-led melody with a narration. While these two elements feel distinct – and I’d recommend playing the composition multiple times to understand everything that’s going on – a steady hand makes this into a track that will permanently impact listeners.

12 Billion Eyes is an effort that draws heavily on the classical and new age tradition with warm arrangements and dynamics (piano / strings) that bolster one another. This trend would also be present in a stand-out track from The Fermi Paradox’s second half, The Great Silence.

The one-two attack of the album’s final tracks (Drake Equation and Arecibo) provides a strong ending to the disc. However, the last third of the album is integral for understanding where Pual K may go in the follow-up to this release. The Fermi Paradox is an engrossing album that will have listeners thinking, with a cohesive sound despite the sheer amount of ground that Paul K covers.

Check out the interview that we conducted with Paul K. The Fermi Paradox comes out globally on November 9th.