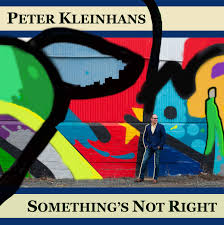 3,000,000 Years is the first track on Peter Kleinhans’ debut album, Something’s Not Right. The song blends together Dave Matthews with the protest tradition of performers like Neil Young and Phil Ochs. The production is robust, allowing the guitars, drums, and Peter’s voice the ability to shine alone or as contributing to the entirety of the composition.

A Separate Time has a slower tempo, along Peter to weave a narrative that will stick with fans long after the album ceases to play. The effort links together the wizened vocals of Lou Reed and Willie Nelson with hints of world music and 1980s / 1990s alternative approaches adopted within.

To Hell and Back jazzes things up with the inclusion of soulful brass. Adopting this approach keeps the momentum of Something’s Not Right high as listeners make it toward the second half of the album. The titular song from Something’s Not Right hits fans over the head with timely repetition of the phrase. The swirling eddies of guitars, the tautness of the bass, and the cogent storytelling present here will keep listeners on the edges of their seats.

’til the Music Stops changes things up with the presence of a female vocalist. The dynamic between these vocals, the ropy, intricate bass line, and guitar make this track shine in it’s late album position. Turn the Tide has a bit of R.E.M. and Talking Heads to it. We love the dynamic between Peter’s vocals and the jangly guitars that issue forth immediately afterwards.

The album concludes with an impressive one-two of Waltz into Darkness and Halifax Harbor. Together, the songs tie a bow on an album that is thoughtful, engaging, and refreshes older styles in a bold new fashion.

Top Tracks: ’til the Music Stops, To Hell and Back