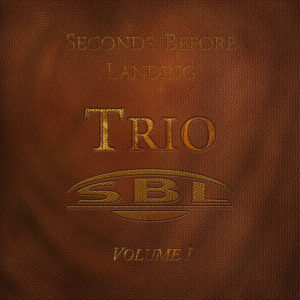 Seconds Before Landing’s fourth release is a three song EP entitled Trio Volume 1 and shows how far songwriting John Crispino and Seconds Before Landing has progressed since their debut concept album The Great Deception. Crispino is a multi-instrumentalist as well and his drumming and synthesizer contributions to the release are every bit as important as his vocal and lyrical offerings. The band has worked with engineer Andy Jackson before and he reprises his role mastering those earlier releases on this EP as well. Jackson has worked extensively with rock legends Pink Floyd and I hear some of their influence in Seconds Before Landing’s music, but the band is never imitative. Instead, Seconds Before Landing’s Trio Volume 1 will surely end this year contending for coveted spots on many Top 10 lists. They are reaching far beyond progressive rock and, instead, a far reaching artistry seems to grow with each new outing from this Pittsburgh based band.

“Maybe I’m a Weirdo” is definitely an offbeat beginning to Trio Volume 1, but the humor and strong characterizations are impossible to deny. It’s the lengthiest track on the album without ever over-stretching the band’s talents and John Crispino’s vocal and lyrical talents are a major reason why the song is so successful. There’s a number of compelling musical elements included in the song, piano, multiple guitar sounds, and some backing vocals from Vanessa Campagna – but none of these additions do anything to dilute the song’s power. Despite the foreignness of the character, listeners can connect with this tune – it’s weird, yes, but there’s something intensely human about the songwriting that engages with listeners without little effort. Andy Jackson’s mastering is exceptional for giving the song an expert sound.

The lead guitar on the song “1-9-2” from band member Steve Schuffert has more bite than any individual six string effort we hear elsewhere on the release. We hear piano in this piece, as well, but it illustrates how well they thread these disparate elements into an overall package rather than focusing on any particular part of the package. There’s a theatrical air surrounding the song similar to the opener, but it’s downplayed some instead of emphasized, and the subtlety is important to setting this tune apart from the opening song. It’s another example, as well, of Crispino’s lyrical prowess and how adeptly he leaves open to listener’s interpretation.

The EP’s last tune “You Won’t Deny Me” is, for me, the most impressive moment on the EP. There’s the same strong presentation of guitar distinguishing this song that sets the opener apart, but it is deployed in a much different way here and seems particularly attuned to the rising and falling of Crispino’s finest vocal performance on the album. The song’s subject matter is rather dark and the music matches that without ever becoming too strained – the focused, not a word or note wasted, attack of the song tightens its approach to a sharp edge that brings the EP to a memorable close. Seconds Before Landing’s Trio Volume 1 will impress casual and hardcore listeners alike.

NeuFutur has covered Seconds Before Landing in the past, covering Now That I Have Your Attention and The Great Deception .