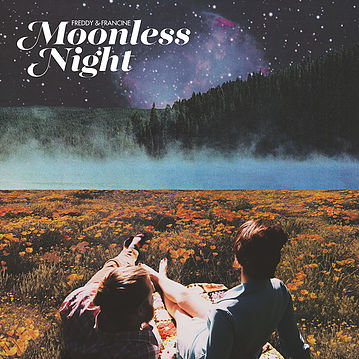 Americana, as a genre, is having a much-deserved moment in the sun. And with it are coming some incredibly original bands that normally wouldn’t be getting a listen if not for folks like The Avett Brothers and Shovels & Rope treading a path to acceptance. Among those that deserve a listen is the brilliant Nashville, by way of LA, -based duo Freddy & Francine (Curiously, there is neither a Freddy nor Francine in the band, rather Bianca Caruso and Lee Ferris both take lead).

Across the six songs on their “Moonless Night” EP, the two trade of turns at the mic, corralling traditional Americana, folk and plenty of pop. Songs like the slow-burn “Better Man,” led by Ferris, and the title track highlight the band’s lyrical prowess, but tracks like the infectious boogie-vibe of “Sweet on You” (Caruso’s vocals are simply mesmerizing here) are just as powerful and prove the band can rock just as easily as they can create a modern tear-in-my-beer moment.

The only disappointment here is that the album is over just as it’s getting started.