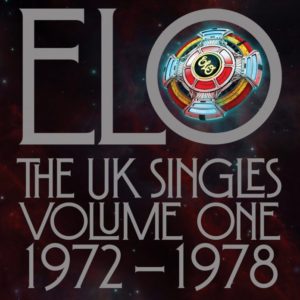 It’s difficult to relay just how influential Jeff Lynne and his group Electric Light Orchestra was and remains to this day, despite release their last big hit in the early 1980s.

Everyone from Oasis to The Killers owe a huge debt to ELO for the influence of songs like “Strange Magic,” “Mr. Blue Sky” and “Roll Over Beethoven,” each dripping with ridiculously sweet harmonies and massive hooks.

Legacy Recordings has just released an impressive Collector’s Boxset of the band’s U.K. singles, released from 1972-through-1978. This impressive set includes a slew of the band’s early hits and B-Sides, spread across 16 7” vinyl records. Excluding songs like 1981’s “Hold on Tight” and music from the early ‘80s Xanadu soundtrack, this set serves almost as a greatest hits package for ELO completist. Along with the ELO singles is a recreation of 1978’s “The ELO EP,” boasting “Can’t Get it Out of My Head,” “Strange Magic,” “Ma-Ma-Ma-Belle” and “Evil Woman.” The singles and EP, all remastered from the band’s original analog tapes, are made to look identical to when they were first released more than 40 years ago.

Despite several break-ups and line-up shuffles over the past few decades, ELO is still putting out new music. Lynne became a sought-after producer having worked with most of the Beatles (George Harrison, Paul McCartney and Ringo Starr), Tom Petty, Bryan Adams and Roy Orbison; he was a member of The Traveling Wilburys; was inducted into the Rock and Roll Hall of Fame last year; and is currently touring as Jeff Lynne’s ELO.