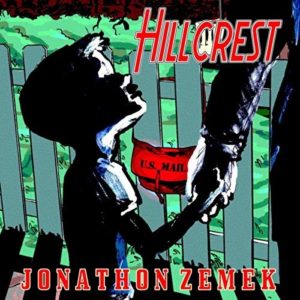 In the history of pop music, there have been artists who built an entire identity around a single hook or style that critics and audiences fell in love with and were never able to put down. There are others though who take their creative ethos further; they push the envelope as far as they can in hopes of not only developing their core artistic profile but also advancing the evolution of music itself. Jonathon Zemek is definitely a member of the latter category, and in his solo album Hillcrest we hear not only who he is but what he wants his music to be (a rarity, to put it mildly, in the music business of today).

Hillcrest is a concept album in the most determined and stimulating sense of the term, but its plethora of content can also be isolated and separated out into twelve distinctively realized chapters of a story. Each song boasts a different genre-bending format, and what you’ll find in one track usually counters whatever precedes it with a measured dose of anarchy. The piano-driven ballad “All In a Dream,” for example, showcases vocalist Andrea Lindzey adding her own flare to Hillcrest, and it’s a completely different shade of color than you’ll find in either of the tracks that surround it (the stoic “Forgive Me” and the folkie “Shine On”).

You wouldn’t expect to find a radio ready gem like “Can’t Go Back” on most progressive records, but frankly very little of Hillcrest fits into the “norm” of what any critic or listener would come to expect in a modern rock album period. The song’s touch of bittersweet blues binds the record together and keeps it from getting too introspective, but it also retains the cohesiveness of the general storyline being conveyed from one track to the next. I don’t remember the last time I could cherry pick through a concept album without feeling like the music was out of context, but that isn’t a problem with any of the songs found on Hillcrest.

Production wise, Jonathon Zemek pulled out all the stops with producer Matt Smith (who also co-wrote and sang on a chunk of Hillcrest), and listeners will immediately recognize the fruits of their labor. Even the minutest details within this album are given a spotlight in the final mix, and none of the individual instruments sound like they’re competing for our attention over the others. Everything works in perfect synchronicity, making the chemistry of the band the real star of the album.

It wouldn’t surprise me if Jonathon Zemek, in addition to the complimentary comic book he’s released alongside this record, adapted Hillcrest for the big screen at some point. It’s as comprehensive a record as I’ve ever heard and sports a plot that would translate to feature film with very little revision, not dissimilar to the progressive rock operas of yesteryear. Unlike its predecessors, Hillcrest is efficient enough to garner the attention of the mainstream pop crowd while also satisfying the wants and needs of hardcore prog fans. It’s a mammoth album in a year weighed down with poorly conceived comebacks, but I think it’s a mere glimpse into what Jonathon Zemek is capable of producing.