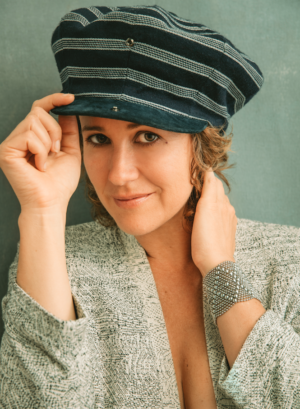 In the gallop of “Those Happy Days,” one of eleven amazing new songs found on Rebecca Blasband’s album Here, we follow a bubbly beat that is determined to get us on our feet and swinging to its affectionate rhythm. Bouncing back and forth off of a glowing melody, the grooves get more and more rebellious as we approach the chorus, which explodes in sonic fireworks once given the room. On the flipside, “Gotta Work It Out” transitions from verse to verse in a haze of guitar wallop and bass tizzies that jettison into the atmosphere and create a smokescreen between us and the lyrics. These two tracks give us a taste of what Here has to offer, but they’re hardly the only reasons you’re going to want to pick up the album this fall.

There’s an urgency to Here that stems from the feverish tone of Blasband’s vocal, which constantly implies that we’re running from something dangerous. “Fool’s Heaven” and the title track feel like sequences in an elaborate dream; no two stanzas are the same lyrically, but the melody is consistent and suffocating. Mixed with a lot of favoritism given to the low-end, other songs like “Who the Hell is Peter Brown?” and the hostile “Target” quake and shake without ever lifting off the ground. The breezy vocals keep the enigmatic poetry from coming off as straight avant-garde rambling, and by the time we reach the closer “Long Distance Love Affair” we feel like we’ve literally experienced all of the emotions that Blasband has musically illustrated for us in the past half hour or so.

The organic quality of the production is stunningly vivid and structured so to make the vocals the object of our affections even in the most dexterous of compositions. “Ghost Song” is deceptively simple; in reality this cut and dry acoustic song has more mechanisms engineering its sonic presence than most heavy metal tracks do. Blasband’s words cling to the rhythm for dear life, and they don’t let go even in the whirlwind of guitar punishment that ensues all around us. It’s a similar story with “Way of the World” and the inspirational “Walking on Water,” although the latter is much more cosmetically accessible than the other two.

Rebecca Blasband is an artist who is evidently secure in her identity as a composer and performer, and we get to witness her at her most uncaged and unfiltered in Here. She doesn’t just grind out eleven new songs in this LP – she conceives an entirely new approach to her signature sound that is perfectly aligned with the contemporary scene. Rather than sacrificing tone for fluidity, she manages to retain both in this record by deliberately keeping it short and simple. Drawing from traditional folk music as well as more modern indie rock, she sews so many different colorful melodies together in this album that it can be hard to pinpoint exactly where it’s ultimate climax is. Here is an LP that speaks for itself and doesn’t require contextual comparisons to any of its competitors – it’s a stone cold original in a sea of posers and pretenders.