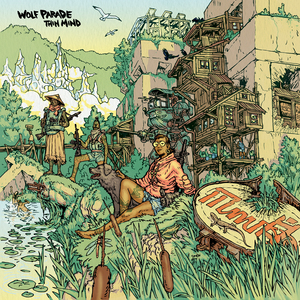 Canadian indie-rockers Wolf Parade have been around the scene for a while, yet their five-year hiatus in 2011 gave fans pause and wondered if the magic would come back. Following Cry Cry Cry in 2017, the band seems to be back on steady ground and are back with their latest full-length Thin Mind.

Granted, Wolf Parade hadn’t popped up on my radar, I took a dive into their back catalog especially sifting through Cry Cry Cry to compare and contrast themes, styles, and the overall sound Wolf Parade have molded through the years and have pulled together on their latest offering. At first glance, it does seem like business as usual for the early 2000s indie-synthrock genre. However, Thin Mind does differ tonally, most impactfully by the synths and strings used throughout the record.

Without any pretense or fanfare, Thin Mind jumps headfirst into Under Glass with opening line “Like science fiction, We’re under the glass again“, cementing the lyrical and musical theme for the entire record. Thin Mind is a concept album of sorts, where Wolf Parade explores the dependence of mankind on technology and how the futuristic virtue can quickly turn to vice and how we skirt around catastrophe hanging by a tentative thread. On tracks like Julia Take Your Man Home, these themes are told via the synthwave keyboard tones, while the lyrics croon about loneliness, addiction of a more literal sort, and the damage it does to the people closest to us. In contrast, upbeat sounding Forest Green paints a bleak picture of an antithetical idyllic dystopia.  Thin Mind ebbs and flows from optimism to sober thoughtfulness, often within the same track, illustrated perfectly on As Kind as You Can; showing the power of mature songwriting using different tempos, guitar and synth tones, and vocal deliveries to change the vibe of the track.

One of my personal favorite moods on Thin Mind is when Wolf Parade sheds all pretense that they like synthwave and put forth their future-noir tones in high gear on Against the Day. The heavily nostalgic retro 80’s sci-fi synthwave tones form a catchy mid-paced backdrop bop over which Spencer Krug’svocals strongly stand tall. Wolf Parade is a group of multi-instrumentalists equally contributing members with a singular approach which yields a cohesive album. Drummer Arlen Thompson knows how to change the overall mood by shifting tempos from upbeat gallops to somber thumps, and guitarist/backing vocalist Dan Boeckner duels superlatively with Krug’s synthesizer shenanigans!

If there are complaints to be made, it would be mostly directed at my personal qualms with the mix on the record. While the bass, drums, synth, and vocals occupy their independent spaces, it is the guitar that takes a beating. The synths come off as overpowering and drown out most of the nuanced guitar riffs and is exacerbated with multiple layers and overdubs. It is a damn shame, because tracks like album-closer Town Square do show flair when the trademark puritan indie-rock guitar tones can shine without being overshadowed by the keyboards.

In any case, Wolf Parade has successfully created a cohesive well thought out record with a focused message which is important to the times we live in, and as a recent listener-turned-fan of the band, I am excited to see where they Fall Into The Future!