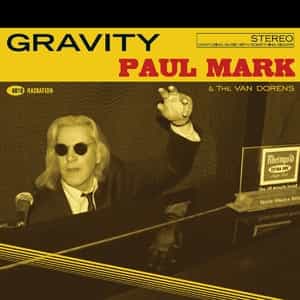 Blushing with a wintry melodicism that feels surprisingly appropriate this June, Paul Mark & the Van Dorens’ “December at the P.O.” has an aching compositional integrity that essentially comes standard on the album Gravity, currently out everywhere quality indie music is sold and streamed. Armed with Mark’s trademark poetry and a glowing piano as sterling as that of “I Spin When You Grin,” “December at the P.O.” is rightly the closing track on Gravity, bringing us full-circle in more ways than one, but it doesn’t overshadow the LP’s grittier moments – such as the string-driven “Heart Full of Soul” and the gut-felt ballad “Forever.” Together with the Van Dorens, Paul Mark seems determined to use every aesthetical tool at his disposal in a quest to reach the audience in his most recent album, which I would say ranks among some of the very best he’s ever stamped his name on. He doesn’t sound like an artist who has been recording since the early 90’s outside of his mature approach to musicality; on most fronts, this is a singer/songwriter who sounds as on-point now as he ever did before.

“Gravity Is Failing” pops out of the silence with a melancholic strut that turns to all-out arrogance by the time Mark begins to croon, and without its angst-ridden introduction, I’m not convinced that the rest of Gravity would feel as organic and unforced as it does. “O T B,” “The Next Fight,” lyric-less “Coronation” and the country-style “You Can Take It With You” are more instrumental showcases than they are anything else, but even beside the stunning “Friend Gone Astray,” they don’t feel like halfhearted contributions to this tracklist at all.

There’s no filler for us to skip over in this latest affair from Paul Mark & the Van Dorens; truth be told, I actually think this feels more like a compilation of hits than it does a set of new songs and concepts strung together within the same recording session. Gravity is very concise and well put together, which isn’t something I’ve been able to say about a lot of veteran releases in the year 2020.

From the melodic storytelling of the troubadour tune “Waiting Round for You” to the crushing groove of “Con Man VIP,” Paul Mark & the Van Dorens’ Gravity is an LP that you won’t be able to put down once you’ve given it that quintessential virgin spin. Mark comes out of the gate hot and doesn’t slow down through any of the dozen tracks featured here, and although hitting the right notes isn’t exactly new territory for him or his band, I can’t say that I was expecting quite as much enthusiasm from this group in their new dispatch. They’ve got the kind of chemistry and energy that often fades after a number of years together, and while I’m tempted to suggest they exploit it with even more grandiosity than they already have, something tells me that it would be wise to leave their formula exactly as they have – after all, it’s gotten them this far.