Self Made EP by Sprockets 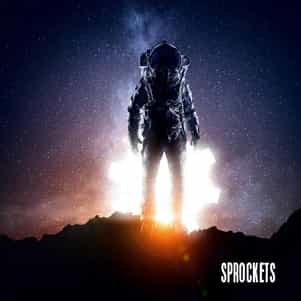 Modern rock tracks never sounded this good – Las Vegas’ Sprockets grip on fast guitars and great lyrics in their new EP Self Made. Taking the energy from the streets and dazzle of the Vegas Strip and transfusing reverb into a fun rock vibe, Sprockets’ gamble pays off in all four tracks.

The hyper guitars in the title track, along with the aggressive drum bed, give the listener a free pass into the fast lane. Fans of Blink 182 and even BUSH, can cling to this track and thrive. “We made our name in the streets,” sings Knight. His voice aches with youth, but hints of a man on a mission to distract his listeners to the accomplishments this band has achieved. This song is reckless endangerment for rock lovers – the sounds of a crashing and pelting await as the body yearns for spasmatic disarray. It’s the kind of song that revs you up in the morning, and clears the night for all things nasty. I think they acknowledge that they are going to make bad decisions – the line “no matter how far we fall we are self-made,” gives this thought that they are the masters of their own domain. It’s that attitude of love us or hate us, we are going to be who we are.

In “Graffiti” (Featuring Jesse Larson), Sprockets’’ paint a clear picture of a memory burned in the protagonist’s brain. “We made it up the staircase…in the stairwell, we made our farewell,” Knight sings. He voice just as innocent-sounding, but the thrust of the music bed elevating the sound and the pain in this voice. This song set a different tone for me – though it’s that same rambunctious rock sound, the lyrical content showed a different side to this band. I imagine this song to be about a tryst some time ago, maybe in a shadowing place, or maybe literally in a stairwell. The relationship ended and not wanting to forget that moment, the idea of tagging the memory on the wall creates for a youthful, yet artistic endeavor.

“Neon Alley” also has a softer side, meshed alongside the throbbing bass and aggressive drum beats. “Bring me home, like cleansing robes,” sings Knight. His boy-next-door voice once again elevating to nitro speed. Finally, in “Romantic As Hell”, the drums take the spotlight with a machine-gun like arrangement. Rapid fire, rat-a-tat, rat-a-tat, rat-a-tat, the drums are fierce! Knight exclaims “in the anchor of a storm…” before his voice collides with the music bed. This song makes you realize all the times that you were in a chaotic or toxic relationship, that maybe the things that were all around you, all the outside influencers, were the reasons for the relationship’s destruction.