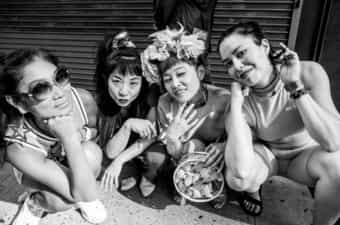 “Blender X” sends Hard Nips’ latest album release Master Cat into the stratosphere from the outset. The sinewy attack present in the opener continues across the remaining seven tracks and plays like a team effort rather than a vehicle for any individual performer. The Ramones are among the four-piece’s self-professed influences and you can hear that in songs such as this. Their punk sound is tempered, however, by a much sharper commercial slant than many similar acts. They are far from pretentious but produce far more intelligent arrangements and lyrics than many other punk rock acts.

The Brooklyn, New York City headquartered quartet are skillful each time out, without question, but likewise know how to flex their musical muscle. They hit it out of the park with the title track. It begins with an extended electronic and effects fueled introduction before transitioning into a sleek mid-tempo arrangement. The song has an effortless glide. Its engine of drums and bass keep things humming through the verses and provide a sturdy foundation for guitarist Saki during the chorus. The guitar is a near-ornamental presence during the verses but adds a percussive oomph to those passages.

“Workaholic” has a methodical forward-push and a churning central riff that never exhausts the listener’s patience. Yoko’s keyboards are an important factor in the song’s success and help diversify its sound; fleshing out the track is key as the main riff might otherwise become wearisome. “Analog Guys” unleashes impressive musical firepower without ever blasting the listener out of their seat. It’s the purest punk rock moment for me, whipping itself into an early frenzy before snapping you in the face with a headlong guitar-driven attack. There’s palpable personality in Yoko’s vocal many listeners will enjoy.

The live atmosphere of the album comes across strong during the song “Motto”. It is among the album’s rockier songs and takes the same mid-tempo pace heard during earlier tracks. Despite its fundamental similarities to previous cuts, it achieves a hard-hitting swagger that feels different than its predecessors. “Cupid Devil” concludes Master Cat on an even slower note. This is arguably the most involved arrangement included on the album and adopts the unique, for this band, approach of having the keyboards often mimic the guitar rather than playing off one another. It has the elusive feel of an album closer, an art in and of itself, without ever coming off heavy-handed.

The band has logged a lot of miles and time together since first banding together in 2009. They approach songwriting and performance, however, with the same zeal and commitment to entertaining the audience that has always embodied their style. Master Cat shows them off working at a high level, but you get the sense hearing these songs that, as superb as they are, Hard Nips haven’t yet reached the peak of their powers. Coming after last year’s extended slow motion nightmare, 2021 deserves a release that mixes kick ass rock, in your face bravado, brains, and playfulness with such memorable results. This fits the bill.