“I Never Catch The Train” by Sarantos 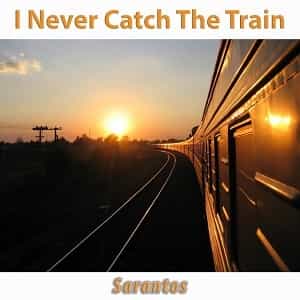 Who is Sarantos? Is he an artist? Is he an author? A spy? An alien from Mars, sent to Earth to infect people with the disease of music? According to Sarantos, himself, he is all of these things, and a few more. His newest single, is an introspective piece, called “I Never Catch The Train.”

If you only knew Sarantos for his music, you’ll have a specific, but possibly incomplete impression of him. He hosts his own radio show, which is designated for burgeoning artists to showcase their work. His background isn’t extensively documented, but we do know, he is of Greek descent. For Sarantos, his music seems to be only one facet of his professional identity. At his core, he seems like an idealist who keeps himself busy, in order to moderate his mental health.

“I Never Catch The Train,” comes across as more of an infomercial with a message, than an attempt at a musical legacy. There isn’t much to say about the piece, musically, as it’s simply a backdrop to showcase Sarantos vocals and lyrics. Sarantos does a nice job of establishing the setting, and the tone of the track, with the lyric video he also released. Sarantos has vowed to release a new song, every first week of the month, until he dies. He subsequently attaches a lyric video to every work, which is admittedly a nice touch

Sarantos’ vocals are timid and shaky at times, with even a hint of shyness. At other times, his voice soars and he shows an impressive range. Truth be told, along with a few lyrical moments, Sarantos’ vocals are the best takeaway from “I Never Catch The Train.” If he works on his phrasing, Sarantos could become something of a standout singer. Of course, this is all based off of one track, as Sarantos’ otherwise boasts an extensive catalog.

I’m always there early/but I never catch the train on time/I’m always on time/and I try and I try/but I never catch the train on time/it always passes me by. There is a glaring poignancy in this chorus, that thankfully overshadows any of the mediocrity within the piece. It’s easily relatable, but it also achieves a tremendous amount of gravitas, when you consider the underlying sense of rejection it captures. It’s also in the way that Sarantos sings the piece. For all of his jocularity and sarcasm, you can feel an undeniable innocence in his voice.

“I Never Catch The Train” is stronger from a lyrical and artistic standpoint, than a musical one. As a standalone song, it is rather forgettable. Sarantos as a persona is his bestselling point at this time, and even then, he is so bizarre in ways that some will ultimately find him alienating. Hidden within all of his subjective faults though, is a hard worker and a creative spirit. Thankfully for Sarantos, he seems in it for the long haul, and who knows, there still could be light at the end of the tunnel.