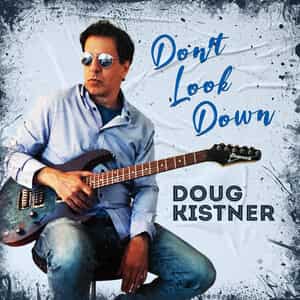 I am taken with the vibrant new mix of horns, keyboards, guitar, and singing that longtime touring musician and vocalist Doug Kistner achieves with his latest single “Don’t Look Down”. It further elevates his profile as a solo artist following the satisfying success he achieved with its preceding singles “Only Road I Know” and “Since We Left Our Dreams”. This trio of tracks shares a similar pedigree, without question, but Kistner has further established his bonafides by resolutely avoiding any overt self-plagiarism.

Yacht rock, as it is called, has a bad name. Or is, at least, viewed as far out of style. Kistner makes no effort to attempt aping the sound of once hugely popular artists like Chicago, Michael McDonald, and Steely Dan, but he slaps a new coat of paint on the style. He isn’t utilizing the yacht rock format for nostalgic reasons – “Don’t Look Down” completely refutes the idea that this style isn’t a viable format for making substantive musical and lyrical statements. It isn’t long past its sell-by date; instead, Kistner has poured old wine into new bottles with entertaining flair.

There’s none or little of the moodiness prevalent in Steely Dan’s songwriting. Kistner offers something closer to Michael McDonald, as a reference point, albeit updated for modern audiences. The compositional instincts driving this recording are superb. There’s no extraneous material weighing the song down; everything is focused towards serving the song rather than relying on flashy bits to draw in listeners. One of the song’s few missteps, in my opinion, is how the backing vocals are integrated into the song.

Otherwise, the singing is otherwise spot on from first line to last. Kistner has a multi-dimensional voice capable of invoking desire, confidence, affability, and sensitivity within the same performance. His phrasing brings the lyrics to life without ever resorting to cheap melodramatic theatrics. He is a professional singer, in every way, and understands how to convincingly inhabit a role for his audience.

The guitar work never takes too much of the spotlight but its abbreviated physicality works well with the percussion, especially during the verses. The keyboards give “Don’t Look Down” an extra bite and some added color; it transitions briefly into a much more funkified number during the song’s second half but it’s in keeping with what’s come before. He even throws in some horns for good measure. Kistner never fails to present an unified musical experience for his listeners and his sure-footedness is one of the song’s most enjoyable traits.

It’s hard to say what his next step will be. One would think that a longer release, either an EP for full length studio effort, is in the cards, but he may follow the path many artists do nowadays and continue releasing singles. Either way, I believe it will be an entertaining experience following this artist as he continues to develop and blossom with the attention on his talents at last. Long may Doug Kistner run and I look forward to his future releases.