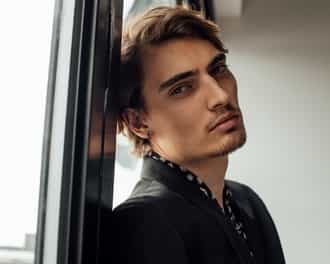 Let it be said that Trevor Drury cannot be pinned down as just one particular thing. With a deep-rooted appreciation for music before going into an acclaimed career as a model for the likes of Tom Ford all while songwriting and crafting on the side, Drury made his debut with the stripped back mood piece The Start and has now shown a new side of his multi-faceted talents with his latest single “Alice” from his upcoming album Alice It’s All In Your Head.

Like David Bowie making a hard left turn from the glam days to the more soul-influenced streak, Drury is similarly experimenting with fantastic results as what he’s crafted is a wildly memorable, catchy, and infectious piece. Inspired by (of all places) a piece of Graffiti he saw with what will be the title of the aforementioned album, Drury has taken that seemingly evocative but almost empty phrase and transformed it into something dark and ominous, backed by some fantastic string and percussive accompaniments.

For those more familiar with Drury’s past work, this may be something of a letdown for some, but for those wanting to see an artist at the height of his creative abilities try something new, this is the place to be. Drury has been vocally critical of the output of contemporary pop music, and I would definitely say this is his jab at that popular medium while still maintaining his indie roots. I think it’s important to note that sometimes not being a fan of something can garner a subversive take on it when an artist is tasked with providing their own interpretation of it, and Drury doesn’t show any contempt for his peers in this work. It’s a very methodical approach wonderfully backed by some astounding production and mixing by Grammy winner and nominee Marc Swersky and Mark Needham, respectively. I would argue one of my biggest criticisms of the song is that it starts high and only gets higher with an explosive climax and it can feel a little exhausting.

A lot of the subtle nuances of the song certainly come from Drury’s dulcet voice and his expressive lyrics that call to mind that feeling of desperation and paranoia, but the production is bombastic and I think taking a slightly smaller start and growing to the fantastic finale might have done a bit better, but as far as an experiment goes to set the table before his upcoming album, it’s a hell of a start. With his upcoming releases, Drury has stated that three iterations of the songs will be available with the record, acoustic, and live performance for any to hear, and that’s exciting to see and the artist allows his audience to choose their preferred listening experience.

There’s a selfless quality in Drury that is wholly unpretentious considering the many artforms he’s dabbled in over the years. You should already board the hype train for the album coming down the line and if it’s as any good as this track, it’ll be something special to behold.