“The Queen of Pittsburgh” by Tedi Brunetti 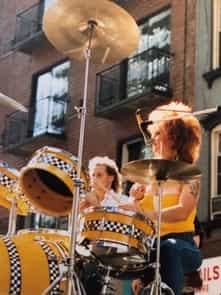 When you’re sixty-eight and retired, there’s no telling where the future might end up taking you. Retirement is meant for grand adventures and relaxation alike, but there’s no handbook of rules or recommendations to take under your wing — for some, they’ll rekindle an old hobby and hone in on it tenfold. Others will take up something new and use retirement as an excuse to fully branch out of their comfort zone. For Tedi Brunetti, she took both of these paths and combined the best parts of each into her unchartered future as a drummer and singer born again into the modern music world after leaving the very same job behind after spending time in the New York City music scene nearly fifty years ago.

The resulting album came about in the form of The Queen of Pittsburgh, an unabashed love letter to Brunetti’s hometown as well as a deep tribute to the styles and sounds she grew up on. Brunetti considers herself the “sober Janis Joplin meeting Steely Dan in Memphis,” and the self-made description rightfully holds a great amount of truth; after reaching sobriety and maintaining it for the past forty years, Brunetti’s trajectory has felt rock-solid. Her signature vocal rasp pays subconscious tribute to the late Joplin but The Queen of Pittsburgh’s instrumentation and integral focus on the drums is all her own. Most noticeable in selections “Evil Woman” and “Same Old Blues,” there’s always a beating, jaunty undercurrent unavoidably attached to the art of blues and soul. Brunetti wears a jazzy heart on her sleeve with this approach and her music greatly benefits from it as a result.

The project feels personal and deeply felt, a fact that only rings more true when you discover that the folks working on the record with her are friends and family she has acquired throughout her wild life. The sentiment makes itself known in the song “When You’re From Pittsburgh,” which portrays the city as a loving, open-armed melting pot worthy of admiration and praise. A personal favorite from the album has to be the final track on the project, “Something’s Cooking.” It sends listeners off in a joyous way that feels equal parts of Pittsburgh as it does Nashville. The entire vibe of a jam session comes out organically within the finale of The Queen of Pittsburgh, which is a remarkably difficult atmosphere to pull off while still maintaining decent sound quality. Leave it to the experienced Brunetti and co. to accomplish all of it and more with their ragtag album.

The lyrics and experience that permeate the project come from a place very few people are lucky enough to experience; Tedi Brunetti’s life story is one of great success and true happiness, and The Queen of Pittsburgh stands as a testament to this very fact. Pittsburgh may be known as the City of Bridges but Brunetti ironically feels like a bridge of her own, joining fans and folks together to find common ground where they least expect it within the realm of rock and blues music.