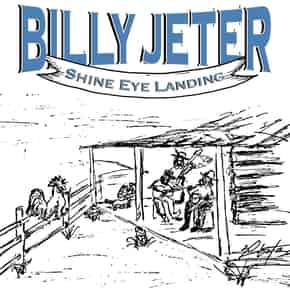 With the last year firmly in the rearview, I think we’ve all gotten a little wistful thinking about the past. We all know from any age those sleepless nights where you ponder the past, what you could have done differently, or the pain you carry from it. Shine Eye Landing, the latest release from Billy Jeter really taps into these sentiments with an album that almost plays out like a photobook. Jeter has been releasing music steadily for some time now and hearing his progression to this album is truly astounding as he’s firmly in control of his sonics and his almost mountain man but with a heart-of-gold performance.

The album can almost be broken into thematic chunks, each preserving and retelling pivotal moments or thoughts from Jeter’s life. The opener “Orion” acts as a perfect prelude that starts off slow but is almost aggressive with the bitter connotation that Jeter brings to many of his lyrics. It’s only as the song progresses and introduces a softer female backing that we begin to see the heart full of joy beating beneath the surface. “Shine Eye Landing”, the follow-up track pairs beautifully with this as it’s like we can hear Jeter getting lost in the thoughts the female backing track brought to him.

The track also uses echoes in a really inspired way that creates this eery if not warm spectral presence. It’s haunting but beautiful. “That’s Just the Way We Roll” and “Sins of Me” act as two sides of the same coin. On one hand, even with as Jeter putting it “Darkness coming”, the track has a sort of nihilistic glee to be able to do whatever you want, consequences are damned. I can see this one really struck a chord with men in their twenties. However, on the flip side “Sins of Me” feels like the song that’ll cut deep with men in their forties. “Sins of me, up for all to see” Jeter proclaims at one point, and despite the gentle pluckings that might imply this feeling of “don’t be so hard on yourself”, Jeter remains self-aware about his shortcomings.

“Cut You Down” is a true standout with wonderful harmonica and added ethereal female vocals as the track has a steady rhythm almost akin to a heartbeat. Something that’s welcomed considering it’s a song about the end. “Spider Lily” is another delight, chronicling the adventures of Lily, a woman tough as nails who loves to get down with the wrong men, the wrong women and despite her self-destructive ways, is just so appealing.

Vince plays a very heavy theme on the record as well. “Oh Lordy Me” and “The Apostle” are a pair of stellar closers, taking us back to the beginning with a young Jeter, itching to get out seemingly being told by the eponymous Apostle, stories of a world beyond what he knows. Everything feels like it comes full circle with Jeter now in the role of Apostle at the beginning of the album. Time truly is a flat circle to Jeter, but it’s this enjoyable you’ll want to walk around and around.