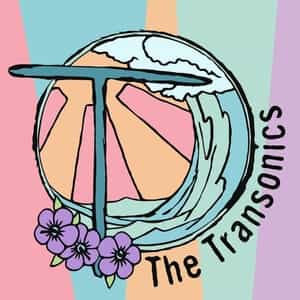 Guiding a soft rhythm with surgically precise string play, The Transonics form a lush backdrop for elegant lyrics to adorn in the song “Tequila,” one of the star tracks from their new EP Tides. Although labored in the delivery of the chorus, the rest of the track plays out rather seamlessly, alluding to a dreamy, almost surf-like psychedelic edge that becomes a bit of a calling card in the record. Unlike the punkier “When You Were Mine,” “Tequila” sports a fragility that spotlights the melodic ribbonry of this band’s sound more than it does anything else, and ironically enough, compositional differences frequently feel like the standard for continuity in Tides. Between these two gems alone, both sonic depth and poetic license are established without having to push past the 4:15 mark, and while there’s a lot more ground covered in this EP beyond what they have to offer, I think it can be said that The Transonics aren’t allowing for ambition to translate as an indulgence for anything in this latest release. They’re tighter than they were in Lost in Time, and I would even argue that in this record they’re sounding like a band more aware of what they want to express emotionally as a collective than they had been with their 2019 debut.

“Midnight” has all the hallmarks of a retro alt-rocker on paper, but the way it’s executed affords every lyric it contains a sense of surrealism that sent chills down my back the first time I listened to Tides. The softer the vocal, the less The Transonics sound like a post-Tegan and Sara indie rock outfit and more like a postmodern alternative to the mainstream excesses a lot of critics had hoped we wouldn’t hear after the death of Bush-era American pop, and this track personifies just how vulnerable a songstress this crew has at the wheel. “Orange Sunshine” admittedly has the cosmetics of a Pixies B-side to “Here Comes Your Man,” but its angelic harmonies have a way of bewitching me to the point where the homage seems almost required for a venture of this kind. All in all, “Getcha” is the one true rock n’ roll bruiser in the tracklist, and it satisfies a pang of hunger for tonal tenacity I’ve had for the better part of the pandemic while featuring a melodicism on par with every other song here.

From the leering and cerebral post-punk title cut to “Midnight” and “Tequila,” Tides is a six-track EP that stimulates intellectually and sonically, leaving little to wonder about this band’s legitimacy in the American underground today. The Transonics have a lot in common with the ferocious punk revivalists I remember taking over cities like Seattle, Portland, and the NorCal coastline some ten years ago on the fabled 101 line, but with one distinct difference – their ultimate aesthetic is rooted in experimenting with conventionality rather than the absurd and downright crude. They’re a thoughtful descendent of the indie pioneers of yesteryear, and present a college rock record in Tides that’s more appealing than almost any LP I’ve reviewed in the past couple of months.