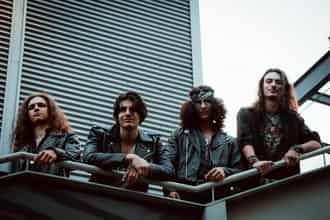 With electronic melodicism riding the top of the charts harder and heavier than ever before, it’s not surprising that quality rock has become all the more a coveted commodity in 2021. The once-abundant guitar solos and searing lead vocals of yesteryear are now the underground cries of expression they started out as, and in the case of the new single “Sunlight Surfing” from Mercury Messiah, they’re the skin and bones of a new wave of traditional rock glory the band is looking to kick off themselves. Unlike some of the retro rock/metal acts that made a splash some fifteen years ago, Mercury Messiah aren’t creating their sound in response to anything – on the contrary, they’re making this in celebration of an identity, not in search of one for themselves.

The guitar parts here are loud and proud, and even though they minimize the presence of the bass and drums on more than a couple of occasions, I don’t see where this wouldn’t be a deliberate setup by the band. The growl of the distortion is strong, but not intense enough to drown out the harmony our singer is developing with the rest of the band, and although the bassline has a clandestine role in shaping the rhythm, its bottom-end tones are the foundation of every soaring vocal climax we find in the latter half of the song. The mechanics are brilliant, but it’s only because of the preciseness of Mercury Messiah’s delivery that we can really appreciate the effort being put into this composition.

While the studio version of “Sunlight Surfing” brings the big guns to the fight, I think it’s more a teaser for this band’s live sound than it is a flat-out template of their style condensed into a five-minute jam. There are a lot of groups more than content to advertise the totality of their depth in an initial offering or even a proper debut single, but Mercury Messiah just doesn’t strike me as being one of those groups. They’re seeking ambitiousness on another level and pursuing creative conceptualism with a wit that tethers their approach to that of the legends, i.e. Led Zeppelin, Deep Purple, and even Pink Floyd. The muscle, the magic, and most certainly the cerebral tension of a classic act is present in their music – now it’s just a matter of bringing it to the stage where it belongs.

Critics everywhere are in love with what Mercury Messiah is doing in this leadoff single from their debut album, and I have to admit that while I was originally a little skeptical of the buzz, there’s just too much moxie in their performance here for any credible rocker to dismiss “Sunlight Surfing” as good luck alone. There’s a seriousness in these players that tells me they’re not going to rest in the studio until they have the exact sound and narrative they want to produce perfected, and if their standard can spread around the underground in the years to come, it’s going to have a big impact on rock and where the genre goes from here.