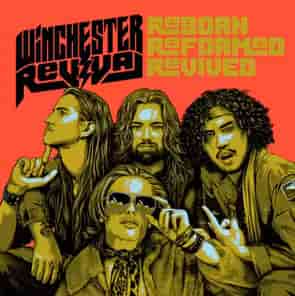 With a screeching howl that verges on retro in tone a couple of times, the blazing fretwork Winchester Revival intends on dishing out in their new single “Reborn, Reformed, Revived” is nothing short of a magnetizing treasure for this track. Although it’s true that all good rock n’ roll relies on a certain level of melodic charisma sourced directly from the guitar and the guitar alone, there’s something to be said about a band in 2021 that still dedicates itself to the blue-collar aesthetics of a bygone generation. This isn’t virtuosic, but it’s the most muscular content I’ve heard from their scene in a while.

Say what you will about the electrified riffing in this release, but there’s nothing old-fashioned about the production quality here. Contrarily, I think there’s a lot to be said about how polished the rhythm section sounds by itself. The bassline is practically one with the percussion in this mix, and yet there’s scarcely a moment in which we can’t tell where one strand of brutality is starting and another is coming to an end. Meticulousness has a place in rock and metal, and anyone who thinks otherwise would be wise to take a peek at content like this.

The expressiveness of the lyrics in “Reborn, Reformed, Revived” is backed up not just by the pacing of the instrumentation, but the actual literacy of the riffs. There’s nothing muddy or amateurish about the arrangement of this track, and when considering the strength of the guitars, the fierce output of our vocalist feels all the more important and structured to make an actual point. This isn’t mindless rocking, but instead, a cultivated opportunity to get something across to both the audience and Winchester Revival’s contemporaries both at home in Australia and everywhere around the world.

This percussion doesn’t give up for anything, and with all of the pressure coming down on it from the melodic instrumentation, this is a really impressive feature. There’s nothing worse than listening to a rock n’ roll single that has all the right pieces and none of the right constructive faceting, but even without being a big fan of this band, I could tell right away that this isn’t their first rodeo. They know their limits and, perhaps even more importantly, they know how to push each other in the right directions to get a specific kind of result in the final product.

There’s nothing loose about the killer jam Winchester Revival drops this December in the form of “Reborn, Reformed, Revived,” and if this track provides us with some insight into what the future is going to sound like for its creators, I think their best days are very much still on the horizon. I haven’t been much for a lot of the newer rock coming out of the American and British undergrounds in the past five years or so, but if these Aussies can keep their momentum rolling into 2022, I think it’s going to be good for both their brand and the genre they’re helping to resurrect.