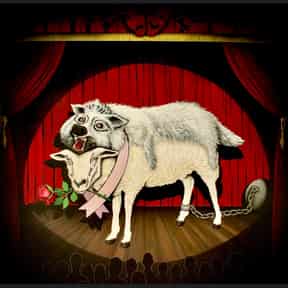 Alexi Dotsenko, Brad Metz, and Jack Ringca have worked at DigDog for a long time but their newest release Homeless Theatre is a different sort of album for the trio. They are attempting to reinvent their sound and approach for longtime listeners and newcomers alike; both camps are on equal footing when dealing with this nine song studio album. It veers wildly in terms of subject matter between moments of hyper realism and extended flights of both musical and lyrical fancy, but there’s a consistent sound and point of view shaping Homeless Theatre. It establishes early on listeners should expect the unexpected.

“Highfingers”, the album opener, drives this point home. The band does not hesitate to mix volleys of distorted guitar in with their more thoughtful and restrained passages. You can’t turn away from the latter; DigDog play here and elsewhere with sinewy and precise skill. Their playing skills are beyond reproach. The vocals are a shrewd addition. DigDog’s singing cuts against the idiosyncratic nature of both the words and musical compositions; few if any of their songs for this album boast anything less than pure pop vocals in decidedly alien environments.

“One Guarantee” and “Sirens of Hell” are quite a pair. They have all the trappings of major tracks on this album. The song lengths never go overboard, but you can hear the band stretching here in a careful and considered fashion. The carefulness never neuters its daring, however. Both tracks, specifically the much darker “Sirens of Hell”, will keep attentive listeners on the proverbial edges of their seat.

Several times the band’s peculiar sense of humor rises to the surface. “Country Gentleman’s Club” definitely takes the path less travelled lyrically, but the vocals and music alike are a rather intelligent though certainly quirky riff on traditional styles. The album peaks again with its title cut. DigDog’s gift for unsettling melodies hits its stride with the guitar playing during this performance and the jolting shift into riffing guitar near the song’s end brings an appropriately apocalyptic note to the number.

“Tree Bones” has a revolving near-hypnotic flavor without ever dizzying you. It is one of the highlights for the band’s guitar playing on this release. The six-string achieves an immediate, engaging sound that carries the song much more than an otherwise fine lead vocal. “Firemelon Beaverwolf” may seem like a throwaway upon initial investigation, but further review solidifies its spot as one of the album’s most energetic rockers and full of clever humor as well as imagination.

“Lullaby” brings the album to a close without any pretentious fanfare. Some listeners may lay that accusation on DigDog but altering their creative direction in such a way is a mark of daring rather than desperation. These are musicians and songwriters who crave new horizons and challenges. Their biggest challenge, however, is bringing listeners along for the ride. Homeless Theatre succeeds in doing so, for the most part, and represents one of the more stunning reinventions you’ll discover in recent music history.