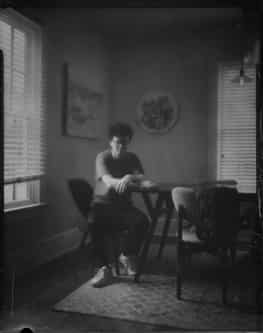 Cory Driscoll got some well-deserved attention for his 2018 LP Tropical Depression, but in the years that have passed since dropping that disc, I think it’s quite obvious that he’s grown exponentially – especially as a songwriter. In his new single, “Hope Changes,” we find a much more bucolic composer in Driscoll than we did around the time he released “The Sinking State,” and to me, his maturity bleeds into the harmonies he forms with the guitar beautifully. He’s come a long way in a short amount of time, and while there’s no shortage of competition coming out of the woodwork among the hotter American and European indie rock acts in the underground right now, his is a sound that feels capable of contending with any of them.

Embracing surreal elements has become the late motif of alternative rock – or, at the very least, the most prominent trend of the early ‘20s – and it’s in this sense that Driscoll’s shift towards the cerebral makes a lot of sense. “Hope Changes” has much of the same resonating postmodernity we heard in “One Foot in Front of the Dark,” but with a caveat; the lyricism is far more focused here than it was nearly four years ago. To me, this songwriter hasn’t just gotten leaner and meaner with his poeticisms, but actually eliminated a lot of the fat from his sound outside of his lyrical delivery. The backdrop is cleaner, his wording more concise, and his overall swagger is a big improvement from the John Roderick-style hesitance of his earliest work.

The guitar parts in “Hope Changes” are completely irreplaceable, and I would go so far as to say that this wouldn’t feel like the same song if Driscoll had chosen to go with a more prominent piano element or bassline. He’s being downright decadent with the strings in a few spots, but it’s okay – his voice has the character in this song to really support whatever instrumental output he encounters. It just so happens that he’s dealing with the perfect complement to his easygoing style in this single, and from where I sit I can see him being able to exploit this element in another release down the line from now.

I’ve been following Cory Driscoll for a little while now, and I must say that I’ve been increasingly intrigued with what he’s been putting out in the last year, more so than what I initially thought I would be back when I heard his music for the very first time. He’s developing his style not around a specific aesthetic, but instead a personality – a personality, which, for all intents and purposes, really is his and his alone. This is personal, intimate songcraft that doesn’t ask for us to relate to the narrative but instead the emotions being utilized to shape it, and in time, I think it’s this kind of moxie-filled composing and performing that will bring Cory Driscoll a lot of love from the press and fans the same.