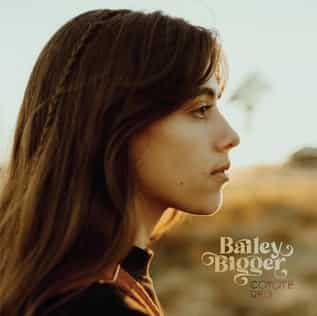 Coyote Red is a brilliant debut album from wildly talented singer/songwriter Bailey Bigger. Born and raised just outside Memphis, Tennessee Bigger started playing guitar and writing songs at the tender age of nine. Her original song “Wildflower” won “Memphis’ Best Song of 2017” when she was just 17, she’s been playing at venues and festivals ever since. Coyote Red is a beautiful album that highlights Bigger’s honest songwriting and artistry. With a stripped back sound, that reminds me of Bob Dylan and his guitar, Coyote Red is album steeped in truth. Bigger effortlessly discusses the up’s and down’s of life while celebrating the beauty of it. Bigger’s naturally soothing yet effervescent voice stays with you after one verse. Bigger secures herself a spot in the modern country music scene by revitalizing the craft of songwriting.

Bigger’s brilliant lyricism cannot be missed on this album, every song is evocative and thought provoking. While her lyrics are deeply personal, there is something deeply universal about Bigger’s songs,a trait she shares with Bruce Springsteen. She talks of love and hate, frustrations, doubts, things we have all felt at one time or another. Her music often depicts vivid stories or imagery that instantly get under your skin. Bigger has a handle on the truth that causes every song to cut to the core. There is a wisdom in her lyrics, a sense of resilience, and a celebration of life. I felt like Bigger took me on a journey with her and I couldn’t help but feel as sense of hope after I finished listening to the album. I found myself commiserating with her, feeling for her, and feeling a little more seen than I did before. There is an undeniably authentic principle to her lyrics that comes from Bigger keeping every topic on the table. It feels like there is no emotion too dark or upsetting, if she feels it, she’s going there. The most impressive aspect of Coyote Red is that she’s able to shine a warm light on difficult topics, offering listeners a wise perspective on  hard feelings.

There are many themes on Coyote Red, but the most fascinating one is memory. In several songs it feels like Bigger is reflecting, remembering, or reminiscing about something in her life. Whether she’s painting a heartbreaking tale of romance on “The Levee” or about accepting the loss of innocence and the passing of time on “Wyly,” you can’t help but be transported. Coyote Red offers listeners snapshots of moments in Bigger’s life that have inspired or defined her, with vivid detail. Closing song, “Mississippi, You’re On My Mind” details a hot summers day in Mississippi. Bigger incorporates the senses into the song, “I think I hear/A noisy old John Deere/In a field specked with dirty cotton lint” and “I think I smell/A honeysuckle vine/The heavy sweetness likes to make me sick.” The last verse is the one that has stayed with me the most, “I think I feel/An angry oven heat/The southern sun just blazes in the sky.” This took me back to the hot summers of my childhood, the ones that used to bake me and make me long for the sweet relief of AC. Bigger finishes that verse perfectly, “I wanna make it to that creek before I fry.”

There is something so soothing and familiar about Coyote Red. It resembles nothing I’ve heard recently but possesses every trait of the past, that I love. The production of this album sounds a retro even though the sound is crystal clear. There is a true lived-in feeling to the albums sound and the lyrics. At times it feels like Bigger is telling you her life story or is taking you on a trip down memory lane. It made me long for warmer months and remember many moments I had forgotten. Its not often that an album really makes you think about your childhood, but Coyote Red does. It encourages you to travel back in time to remember a long lost self.

Bailey Bigger songs are incredibly detailed and packed with feeling. She never cheapens any of her thoughts or feelings to make them go down easier, she leans into them. Resulting in a musical realism that is scarce in this day and age. Her emotional maturity and inclination to learn from the highs and lows of life is a highlight of Coyote Red. This is an incredible debut album that promises to put Bigger’s name on everyone’s lips. She makes music from her heart and you can feel it. Do yourself a favor and listen to Coyote Red, out now!