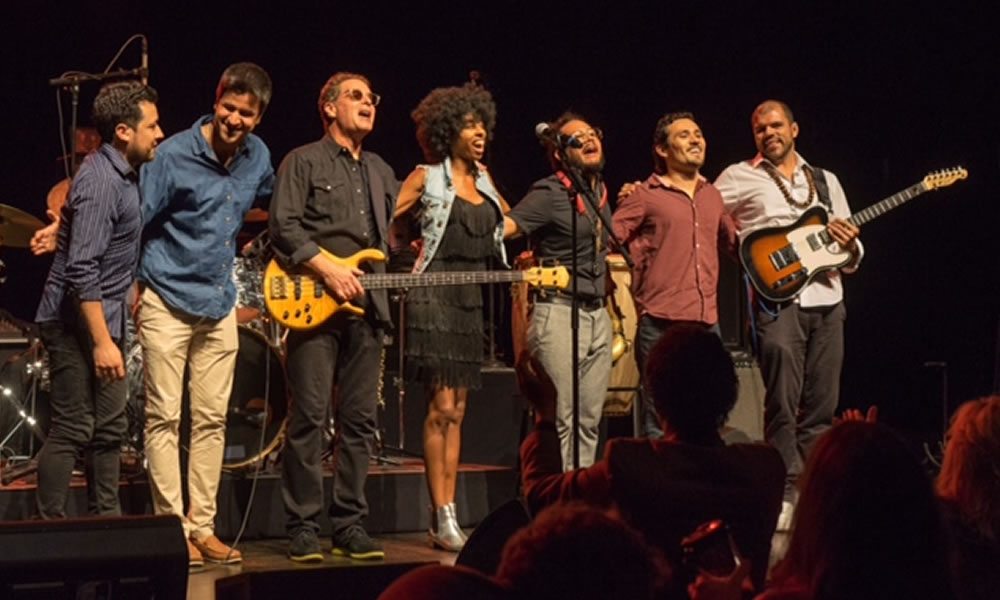 Fans of pure jazz fusion as it was always meant to be consumed rejoice; 2019 officially commences with the release of the Robert Miller-led Project Grand Slam’s Greetings from Serbia, the group’s first live album and virgin offering to a brand new year. We begin with the rolling grooves of “You Started Something,” which as its title implies inspires something beyond infectious inside of anyone within earshot. Big rhythm is commanded by the gilded voice of Ziarra Washington, who navigates swirling sonic waves the size of skyscrapers with an airy fragility that is spellbinding from the very instant she starts to sing.

“You Started Something” gets us dancing, but “1972”throws down a funky hammer that is almost too limber for humans to keep up with. The space aged beat sways like a thousand pound pendulum above a glassy bass and drum blend that is just itching to spill into the guitar’s studious riffing. “I’m So Glad” brings Washington back into the fold and lights up the Serbian crowd with a sloshy tonality that takes a second to get fired up, but once it does is just about impossible to contain. These songs sound so fierce and urgent, and when you factor in the grit of this live mix it’s almost as if we’re sitting in the audience with the crowd.

The crown jewel of Greetings from Serbia is “Lament,” the band’s hit single, which shimmers with an effervescence that was more understated in the studio version of the song. It’s a nice break in the pace before we’re jolted by the heavy assault of “No No No”and massaged by the rigidity of “Free,” which has a certain jam band exuberance to it but falls short of becoming the repetitive progressive nonsense that eventually brought down the mid-90’s Deadhead revivalists. Say what you will about modern jazz, but if Greetings from Serbia doesn’t stimulate your soul then I don’t know what could.

“Gorilla” hums with an off-the-cuff, whispering bass that interlocks with the drums and ushers us into the straight up cathartic oasis that is “I Can’t Explain” (which for a lot of millennial listeners might be even more affectionately crafted than The Who’s version was). The five minutes and change that “The Queen’s Carnival” runs tests the endurance of Project Grand Slam with a larger than life island-flavored session that fires on all cylinders and has the power to leave listeners exhausted. On this front, one can only imagine how the players must have felt busting out these grooves one after another with zero breaks in between.

Greetings from Serbia comes to a conclusion with a cover of “Fire,” the legendary Jimi Hendrix song that became a staple of the Experience’s live shows some half century ago and could easily serve Project Grand Slam’s sets just as well. Washington doesn’t even try to replicate Jimi’s raspy, sexual growl; she’s more than content to impart to usher own melodic daggers, and in the end her vocal in the song is what makes the track ultimately feel complete. You don’t have to be the biggest jazz aficionado in the world to fall hard for what this album provokes in the hearts of anyone who has ever loved a good beat. Robert Miller’s most recent contribution to the international pop songbook is unquestionably worth acquiring if you’re keen on great music, and a wonderful way to warm up this chilly January.

The music of Project Grand Slam has been heard all over the world due to the promotional services offered by Danie Cortese Entertainment & Publicity. Learn more here – http://www.daniecorteseent.com/