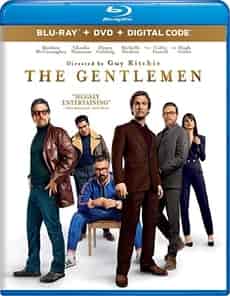 Guy Ritchie has been sorely missed for the past decade or so. Sure, he was making movies (Aladdin, Sherlock Holmes, King Artur, etc.), but he wasn’t making GUY RITCHIE movies; movies filled with memorable gangsters, senseless violence, questionable protagonist and whip smart quotable dialogue. You have to go all the way back to 2008’s RocknRolla to even come close to prime Ritchie (Lock, Stock And Two Smoking Barrels, Snatch). The Gentlemen, thankful, is uncut Ritchie with some inspired casting.

Matthew McConaughey plays an American who has built a massive pot empire in England and is ready to sell his operation and move on to new things. Charlie Hunnam is his loyal lieutenant. There are a slew of other characters, but Hugh Grant as a sleezy private investigator hired by a tabloid to dig up dirt on McConaughey’s character, but would rather blackmail him; and Colin Firth as the figurehead to a young group of acrobatic thieves, are both standouts.

The action is inspired, the plot twists brilliant and the dialogue is pure Ritchie; combined it’s makes for a genre many have tried to emulate in his absence. Like Quentin Tarantino or Danny Boyle, Guy Ritchie has been able to create a wildly unique, distinctive style of filmmaking. The Gentlemen shows just how much he has been missed.