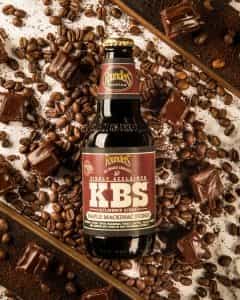 Founders has normalized a few of the variants of KBS this year around with specialty 4-packs of their Kentucky Breakfast Stout. Of course, the company is making their mainline version (12% ABV) available as well. We were fortunate and received samples of each of 2020’s version of KBS.

KBS – 2020’s KBS is well-balanced, ensuring that there is a bit of a burn in the initial sip. Hints of toasted malt and a bit of molasses come forth shortly after. A good amount of heat concludes each sip. The overall constellation of flavors of KBS shift subtly through each 12-ounce experience one has with the stuff. Bourbon is present but Founders does a great job in presenting it in such a way that its presence compliments, rather than dwarfs, the other notes that are present.

KBS Espresso – This variety (as well as Maple Mackinac Fudge) uses the base KBS offering as a starting point. After the beer spends its year period in bourbon barrels, Founders infuses the result with espresso beans which use baristas for their coffee. The result is an imperial, bourbon barrel aged stout that is able to provide a collection of sharper elements. Of course, there’s still the bourbon barrel booziness that represents the brew’s backbone, but the bit of a strong, jacked-up coffee taste is able to peak through. The presence of espresso flavors into the mix diffuses a bit of the alcohol snap that traditional KBS has.

KBS Maple Mackinac Fudge – Founders puts on Michigan institutions with this variety. The fudge and maple elements end up veering KBS into pastry stout territory. Bold sugar flavors flirt with all of the heat and assertive elements of the base beer. Of the three versions, the Maple Mackinac Fudge may be the most dangerous as the alcohol is muted wonderfully by the inclusion of the maple and the more caramel sides of this offering.

Look to spend about $16 (base) to $20-24 (Espresso/Mackinac Fudge) per 4 pack of bottles. Draft options are available. Founders will be offering KBS Espresso and Maple Mackinac Fudge through the end of December.