“Tell Me” by Missing-Nin 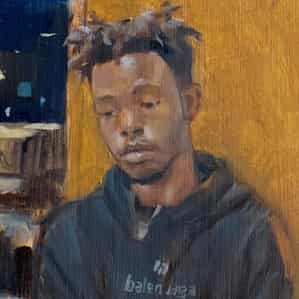 Emotion has a special role to play in the new single “Tell Me” from Missing-Nin, and it has more to do with shaping the core of the narrative than it does facilitate a smart rhyme. Rather than exploiting a generic pop model in this performance, the much-hyped Missing-Nin seems deliberately removed from the lead vocal, as if to translate unspeakable grief into the most brooding delivery I’ve heard from an indie singer/songwriter all year long. He’s carrying the weight of the world on his shoulders in this piece, sharing the burden with a piano melody that gave me chills right out of the box.

The vocal harmony is supremely fragile and made all the more vulnerable by the presence of the lead singer defining its position in this arrangement, but I don’t know that I would call it the focal point of the song. On the contrary, the slow-rolling pace of the music is perhaps the greatest source of emotional expression, countering the very notion of decadence with something stripped-down and conservative around every turn. It’s very minimal, but not quite minimalist in the sense of following the same pattern a lot of American and British pop composers have been in 2021.

One of the most compelling tragedies of the modern pop genre is the surrealism movement, which has produced a lot of intriguing post-pop conceptualism but not nearly as much tonal sophistication as one might hope for, but this isn’t a problem for Missing-Nin. Tonally speaking, there’s an angst that comes through the backend noise his vocal is suffocating so brilliantly from the top of the mix, and it has a big effect on how we’re to break down the meaning of the latter half of the song. When everything’s on the line, this player isn’t relying on his voice alone, but every tool he has at his disposal here.

Although he circumvents the pitfalls of overindulgence quite marvelously in this performance, I wouldn’t say that Missing-Nin is incapable of going bigger and more theatrical in a future release – instead, I believe this is the perfect way to juxtapose his soft side with something a bit more boisterous in his next big studio cut. Contrast is everything in the contemporary pop genre, and for this artist to establish himself as one of the premier players coming out of his scene’s vast underground at the moment, he needed to drop something extreme in the form of “Tell Me” this summer.

A delightfully spellbinding affair that is likely to leave you more than a little curious in its creator’s discography, “Tell Me” is a beautiful addition to Missing-Nin’s body of work and reason enough to keep your eyes peeled for another LP from this boldly talented young musician. He’s got a lot of moxie but little of the cocky attitude that has stopped songwriters of his caliber from reaching the heights in the past, and going off of what he’s already accomplished thus far, I believe this will not be the last indie hit he turns in before his career concludes.