Stopping by the Kemah Boardwalk 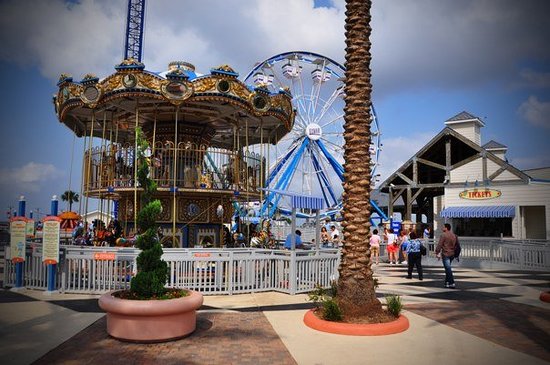 About a year ago, we received the CityPASS ($62) for Houston, Texas. We were able to hit up a number of different attractions, including the Houston Space Center and the Aquarium. Our most favorite part of the trip had to be our visit to the Kemah Boardwalk. While it was still a bit on the chilly and windy side of things (our visit was in February), there were still enough in the way of attractions to keep things interesting. So, let us escort you through some of the things you can do in the Boardwalk.

The first thing that separated the Kemah Boardwalk from other boardwalks (such as the ones in NYC, London and the Jersey Shore) was how approachable and cheap the parking was. We were able to pull in to a spot about 25 feet away from the main gates of the Boardwalk and park there all day for $5. There were a number of rides for all ages. Where many amusement parks have limited amounts of attractions for the toddler / pre-school set, there were no less than five attractions that our daughter could ride. The lines were fairly short as well; rarely (except for the Ferris Wheel) did we have to wait more than one cycle to get onto the attraction.

Prices for food and snacks were fairly cheap as well; we were able to grab drinks for under $5 and various fair foods (e.g. cotton candy) for a price fairly close to what you would be able to get from local supermarkets. For those parents bringing their children to the Kemah Boardwalk, we whole-heartedly recommend jumping on the miniature train that snakes its way through the entirety of the park. There are a number of Easter eggs that are secreted away on the trail (such as the evidence of a miner shootout) that are only able to be seen by those taking the trip.

We can’t vouch for how empty that the Kemah Boardwalk will be by the time summer starts, but it really is a good way to spend a day. Ample amounts of stores will further increase the amount of time that one spends down there, while the beautiful sites of the Gulf of Mexico are truly a world-class vista for those that stop on by.