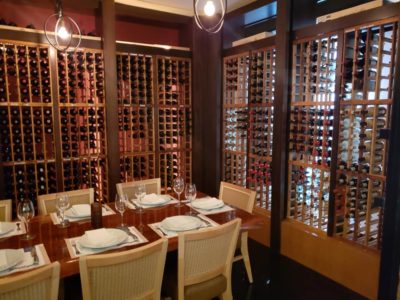 We were fortunate enough to watch Umphrey’s McGee a few months back at the House of Blues in Dallas, but part of the reason that the trip was so memorable was the dinner we picked up immediately before that. We stopped by Corrientes 348 (1807 Ross Ave, Dallas Texas 75201) to set the night off right.

This Argentinian steakhouse has a deep menu that has authentic Argentinian cuisine as its backbone. The Morcilla (blood sausage; $22) has a depth of flavor that marries together distinct porcine elements with a bit of spice and minerals. When served alongside the restaurant’s crunchy (and rich) crusty bread, the appetizer shines even more brightly.

The Empanadas 348 ($6.50/each) were light and airy. With just enough pastry to cover the filling (beef with eggs, olives, and raisins for meatlovers; zucchini or leeks with cheeses for vegetarians), the flavor profile of the appetizer was out of this world. Rich, moist, flaky, and with just enough crispness to buttress the creamier insides, we’d have to place Corrientes 348’s Empanadas at the top of the plates we experienced during the meal.

The Papatasso ($12) are another specialty of the restaurant; delicately smashed potatoes are given a bit of pizzazz with the inclusion of oregano. Rustic in its simplicity, the Pina ($18; grilled pineapple with razor-thin prosciutto) was a fun take on the traditional ham with pineapple plate that was iconic throughout the mid-20th century.

The depth of wines, caipirinhas, and craft beers at Corrientes 348 provides further allure to the restaurant. With a deep wine cellar pulling out rarities not only from South America but the United States, continental Europe, and Australia alike, the restaurant will please even the most finnicky vine-head. Additional icewines and dessert wines are available as well.

With taps covering the wide array of Dallas-area breweries (Dallas Blonde, Blood & Honey, and Sidewinder are placed alongside Boulevard’s Tank 7), those that are looking for a top-notch beer to marry to their luxurious steaks will be similarly pleased.

We were treated to the Bife de Costilla ($112; Tomahawk ribs with the bone left-in) as the cornerstone of our meal. The variety of doneness (medium to rare) ensured that both of us were able to find the perfectly-prepared piece of meat. While we had already been stuffed by the first half of the meal, there was more than enough in the way of steak that we were able to bring another serving home.

To conclude our night at Corrientes 348, we picked out their Tres Leches Cake ($11). An ample portion made it a struggle for both of us to complete; the composition of the cake and the rich milks in which it was draped put a stellar cap on our dining experience.

We cannot recommend Corrientes 348 more strongly. The ambiance of the restaurant coupled with the world-class food ensured that we would be coming back in short order. For more information about the full menu that is offered at the Dallas location or specials offered throughout the week, make it a point to visit their Facebook profile.