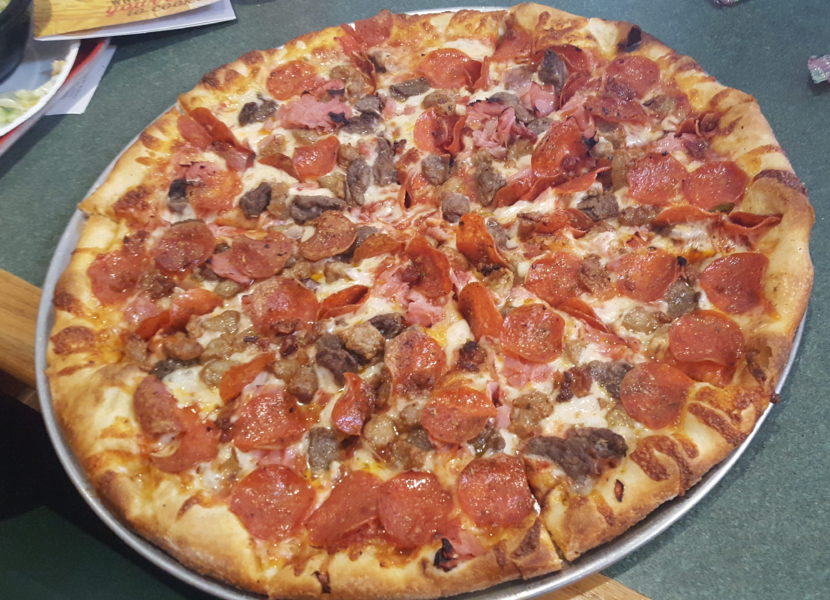 Part of the fun that we have when going out on the road for NeuFutur has to be the variety of restaurant chains that we have the opportunity to visit. On our way back from Denver, Colorado, we had a pretty length return ahead of us. After a particularly daunting drive through New Mexico, we finally got into Texas and had a chance to stop at the Lubbock, Texas location of Dion’s. The store was well kept up and had a classic dining (think mid-1990s) feel to the decor. The restaurant was large and accommodating, while the employees at the register were friendly and assisted us with the order. We picked “The Carnivor” and a few salads for the order. We were able to keep our toddler busy by showing her the steps leading to a translucent panel. This panel allowed for anyone to check in on the progress of their pizza, which was a nice touch.

Our salads were ready a few minutes after we ordered. I chose a House Salad ($3.70) which came with ample amounts of lettuce, onions, croutons and tomatoes, while my wife purchased the Chef Salad ($4.00) which was filled with cheese, egg, and ham. Both of the salads came with a unique twist in “Dion’s Mix”, the company’s own blend of cucumbers, red onions and bell peppers). We appreciate the “down-home” feeling that Dion’s cultivated throughout the experience, a touch that was furthered with the inclusion of paper plates with the salads. We had our name called out and were greeted with a pizza that was piping-hot to the point that we had to knife and fork the first few bites. Dion’s The Carnivor pizza has all of the meats that one could desire. The blend of pepperoni, bacon, Italian-seasoned sausage, ground beef and ham made each slice feel as if it weighed over a pound. It also stretched the fully loaded pizza in that after one ate a slice, they were too full to delve into much of anything else. It got to the point that we had to stash away the remainder of our Cheese Toast. Dion’s has stores in Colorado, New Mexico, and Texas. A full list of their main menu items and a service to order online is available at their main domain. The 2721 82nd Street location of Dion’s is open Sunday to Thursday from 10:30 AM until 10:00 PM; the restaurant is open an additional hour (until 11PM) on Fridays and Saturdays.