When there are so many different films and releases in the public domain, it is not surprising that it takes years for some of them to be put on the then-dominant media protocol. Some well-known films from the early half of the twentieth century have yet to make it on DVD, despite the DVD format being dominant for other a decade. It is thus a great site to see E1 Entertainment (formerly Koch Entertainment) being proactive and putting a well-known film onto the Blu-Ray format so early in Blu-Rayâ€™s reign on the top.

Gulliverâ€™s Travels is a story that is well known to most individuals throughout the globe, and Max Fleisherâ€™s 1939 interpretation of the story is something that has been breathing further life into that story since 1939. E1 has taken an original 35mm film source and mastered it to a Blu-Ray level of quality, making the animations and colors pop in a 16×9 format. The audio track has been mastered in a similar way, ensuring that what viewers hear on this Blu-Ray disc is the equivalent of what moviegoers originally heard over 70 years ago when they took on Fleischerâ€™s film. Even at the price point which E1 has set (the MSRP is pegged at $20), the value comes further into clarity when one sees the amount of bonus features that are present on this release.

â€œThe Making of a Cartoonâ€ is an impressive look into Fleisher Studiosâ€™ hay-day, while the inclusion of two short cartoons â€“ â€œKing for a Dayâ€ and â€œSwing Cleaningâ€ should turn this Blu-Ray Disc from a recommended to a required purchase for anyone that is a fan of old cartoons or of the great work that Max Fleischer was known for throughout eir career. I would love to see E1 continue to release these older films, and change the trend that was discussed at the beginning of the review. There are still a number of films, cartoons, and similar materials that have not made the transition from VHS to DVD (and still some that have not been on any home video formats): hereâ€™s to hoping that E1 does with them is similar in quality to what they have done to Gulliverâ€™s Travels here. 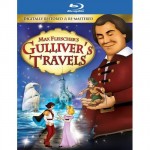