Official Truth The Inside Story of Pantera Book Review

Pantera  seemed to come out of nowhere in the late 80’s with Cowboys From Hell, a rather apt title summing up these Texas-bred good ole’ boys  with a penchant for blistering metal and plenty of booze. Though to be fair, they’d been at it playing and recording since the early 80’s – taking the punk rock DIY path of self-releasing –  it just took the music world and the larger music-buying public  a few years to catch up with the band’s ambition and talent.

In Official Truth, Pantera bassist and co-founder Rex Brown details those early, lean years for the band, their not-so-overnight success and excess and the band’s eventual breaking apart. He goes into painful detail about the shocking 2004 on-stage murder of Pantera guitarist Dimebag Darrell (at that point playing in the post-Pantera group Damageplan). Taking some of the blame himself, Brown is honest about the group’s falling out, as well as his drifting apart from Darrell and his brother (former Pantera and Damageplan drummer) Vinnie Paul.

With nine albums spanning almost two decades, Pantera was one of the most influential metal bands to come out of the 80’s and 90’s, right up there with Metallica, Slayer, Anthrax and Megadeth (all of which make cameos in Official Truth). Judging by Brown’s memoir, there was plenty of tension within the band at the end to help drive that aggressive vibe in their music.

Official Truth The Inside Story of Pantera Book Review

Official Truth: The Inside Story of Pantera by Rex Brown/Hardcover, 304 pages/Da Capo Press/2013 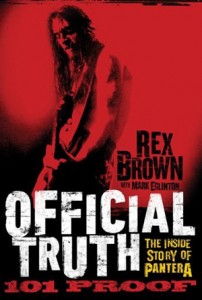