The Pulse product line by JBL contains some of the most beloved electronics devices of the year but there is a product line extension that looks to go and unseat  the multi-colored Pulse device as the must buy on the 2014 holiday season. The Pulse by Sengled LED Speaker is something that has dual functionality – it provides users with a distinctly colored light and with a substantial enough speaker to go and keep a party going from the beginning to the end of the night. Bluetooth technology makes it easy to sync a mp3 device, a smartphone or any other capable device with the speaker. 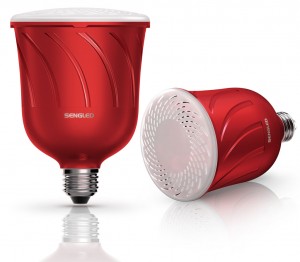 The LED light also will decrease the overall energy bill, as LED lights (2700 K at 15 watts) illuminate as brightly as conventional bulbs without expending anywhere near as much light. There is an app (Pulse) for the iOS and Android that will provide a greater amount of functionality to the Pulse system; the device simply is able to work itself in, no matter how cozy (or large) one’s living surroundings may be.

The overall fidelity of the sound that comes from the Pulse by Sengled LED Speaker is strong meaning that the treble and bass are accurately reproduced from the original source recording. In particular the bass that is provided by this device is enough to get windows shaking without presenting too terribly much in the way of distortion. Vocals and dialogue are captured equally well with the device meaning that any sort of music will sound good being played back on this wireless audio system. The lack of a remote control makes the device that much more intuitive – just change tracks on the smart phone or the MP3 player and the speaker will immediately kick into high gear.