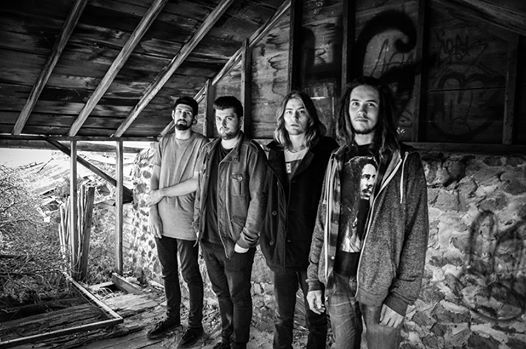 In two-three sentences, what does the band provide over other artists/performers currently out there?
As a band we pride ourselves on having a killer live show every time we play. We think that is a big part of our appeal, the fans can see how much playing our music to people means to us. We also feel that we have a fresh sound that is a unique blend of all the band members, we are always honest to ourselves and the listeners respect that. You have a new EP out. What sort of setup (instruments, studios) did the band employ during the recording process?
Our debut EP was recorded at Salt Studios in Melbourne and was mixed by Andy Simpson. We had previously worked on the songs for the better part of a year so we came into the studio with a lot of confidence. We laid down a basic version of each of the songs with all of us setup in adjacent rooms. Our amazing genius of a drummer Corey, managed to get all the drums first take which made that part of the process a lot easier. Ryan then came in and laid down all of the bass tracks with confidence. Next was guitars. Nick tried to keep things relatively simple so to not over complicate the sound. We recorded two different guitar tracks for each song which we panned left and right, one of which being an Ibanez Gem and the other guitar was an Epiphone SG for leads both through an Orange head and cab.

The last piece of the puzzle was to record the vocals and Dylan came in and nailed it from the get go and completed the recording stage.

Hollow Ground’s music is intricate and employs a number of disparate elements. What process of song-writing and arranging does the band employ?
We try to stay true to ourselves at every opportunity, so our songwriting process can be long and gruelling at times as we are always trying to find what feels best for the band. We also try and keep it fresh and not get bogged down in specific formulas so that we can just let the music flow naturally.

What are the band’s biggest influences?
The band all have very different influences which brings an interesting sound when brought together. Corey and Nick have a lot of metal influences while Dylan and Ryan have a lot of grunge influences but as a band we are fans of music in general with an appreciation for all styles of music. A lot of our writing process is from being influenced and inspired by each other’s ideas.

In a time when gratification has to be instant and music rarely exceeds four minutes, your music goes beyond that.

What about tracks like A Way Forward and My Trendkill makes them able to shine after four or five minutes?
We try to keep our music exciting, interesting and unpredictable. Our music isn’t just about a catchy hook, we like to tell a story and make people feel something. Music is art and it’s about freedom of creative expression. If people don’t have the capabilities of paying attention for longer than 4 minutes then that is their own loss.

What does the rest of 2015 hold for you?
We are heading back into the studio at the end of June to record our second EP which will feature a dark side and a light side showing the spectrum of our sound. The EP will be 2 discs with 4 tracks on both.
We will be filming our second music video from our debut EP for the song “Stranger” this will be a very exciting project for us as we work with our close friends at Leamann Films.
We also plan on playing as many gigs in as many places as possible!

How are social media services different from the traditional face to face meeting that musicians traditionally utilize when they play live? Are the types of fans different between online and offline interactions?
People on the Internet are a lot more critical at times and are very quick to dismiss you. Seeing a band live and experiencing them to the fullest extent is a much greater experience in comparison.

NeuFutur is an American magazine, so we’re not too terribly sure what the Australian radio scene is like. How well is hard rock represented in your country?
Hard Rock music frequently takes a back seat to the beauty contest of popstars who rule the music industry these days. Which is a shame because it makes it that much harder for bands like us and many others to get any mainstream exposure.

How can interested readers find more information about you?
You can find our music on YouTube or on band camp at:
https://hollowgroundmusic.bandcamp.com