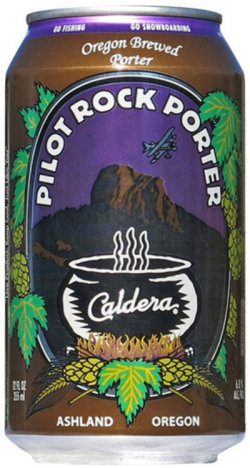 The Pilot Rock Porter by Oregon’s Caldera Brewing pours with a tremendously dark coloration and a fair amount of cream to tan-colored head that remains stubbornly on the top of the beer. There is a solid amount of coffee and mocha flavors that immediately are noticed, while a malt and sweet set of notes can be discerned shortly after. The beer is well-balanced, ensuring that a different set of flavors can be tasted with each sip of Pilot Rock. Slight hints of dark fruit poke their heads out at points, adding a decent amount of sweetness to the resulting beer. While only pegged at 6.0% ABV, there is a decent burn that provides further depth to this effort. Pilot Rock would be perfectly paired with lamb, beef, and BBQ; the gnarly and thick flavors here would challenge similarly-strong aspects to push each to a higher plateau. As the brew continues to warm, malt and sweeter elements intertwine to create something that is formidable without being overwhelming. Flavors are in your face without being exhausting, making Caldera’s Pilot Rock into one of the most memorable porters that we have experienced in 2015.  While not a 10-percenter, a few cans of Pilot Rock should more than suffice in getting individuals into a nice mind set. The beer has enough legs to appease fans of alternative styles (stouts and IPAs) without losing its porter soul; Caldera has made an eclectic and sublimely satisfying effort in this one.

For more information about Caldera’s yearly and seasonal offering, their domain possesses a tremendous wealth of information. The brewery’s Twitter and Facebook provides viewers with the most up to date news, discusses Caldera’s latest awards, and the restaurant’s menu offerings.