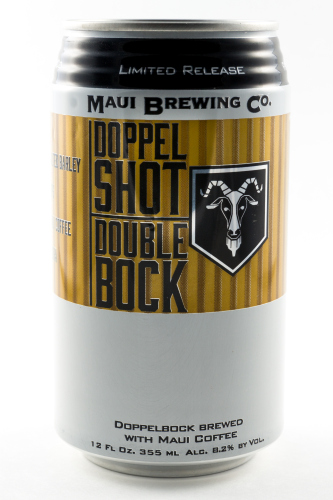 The inclusion of coffee into the latest Maui Brewing Company seasonal, Doppelshot Doublebock does a good job at hiding some of the overly sweet elements that can sometimes be discerned from the bock style. Doppelshot pours with a hazy dark brown – light orange coloration and a small amount of wispy white head that trails its way down a glass or mug. The ABV (8.2%) is similarly well hidden with this seasonal, making for a beer that goes down like water. The depth of this beer is substantial, allowing one to just barely make out hints of grain and hop at the beer’s periphery. It is this full chorus of flavors that makes this such an alluring beer. 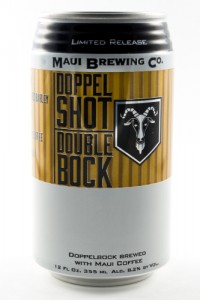 The coffee, cocoa, and spice (cinnamon, nutmeg) that are dominant during the initial sips of the Doppelshot separate this beer from a number of the other bocks/ doppelbocks on the market. As Maui’s Doppelshot Doublebock gets closer to room temperature, the sharper coffee elements fade slightly, giving toasted and bready malts and more sugary elements time to shine. The shift in the overall flavor profile of Doppelshot will keep imbibers interested from beginning to end, while the warming effect of the beer is perfect for those crisp nights of early autumn.

Sweet cream elements allow the coffee side of Maui’s Doppelshot Doublebock to spin itself into more of a mocha or latte flavor. It is this wide array of twists and turns that make this beer into a must-taste venture.  For more information about the full listing of seasonal and year-round Maui Brewing Company offerings, give their website a spin. Distribution of Maui’s offerings is consistent through the west coast and in specific states (Alaska, Colorado, Texas, Virginia, Maryland). Visit our Coconut Porter and Kihei Kolsch reviews for additional coverage of Maui’s beer offerings.