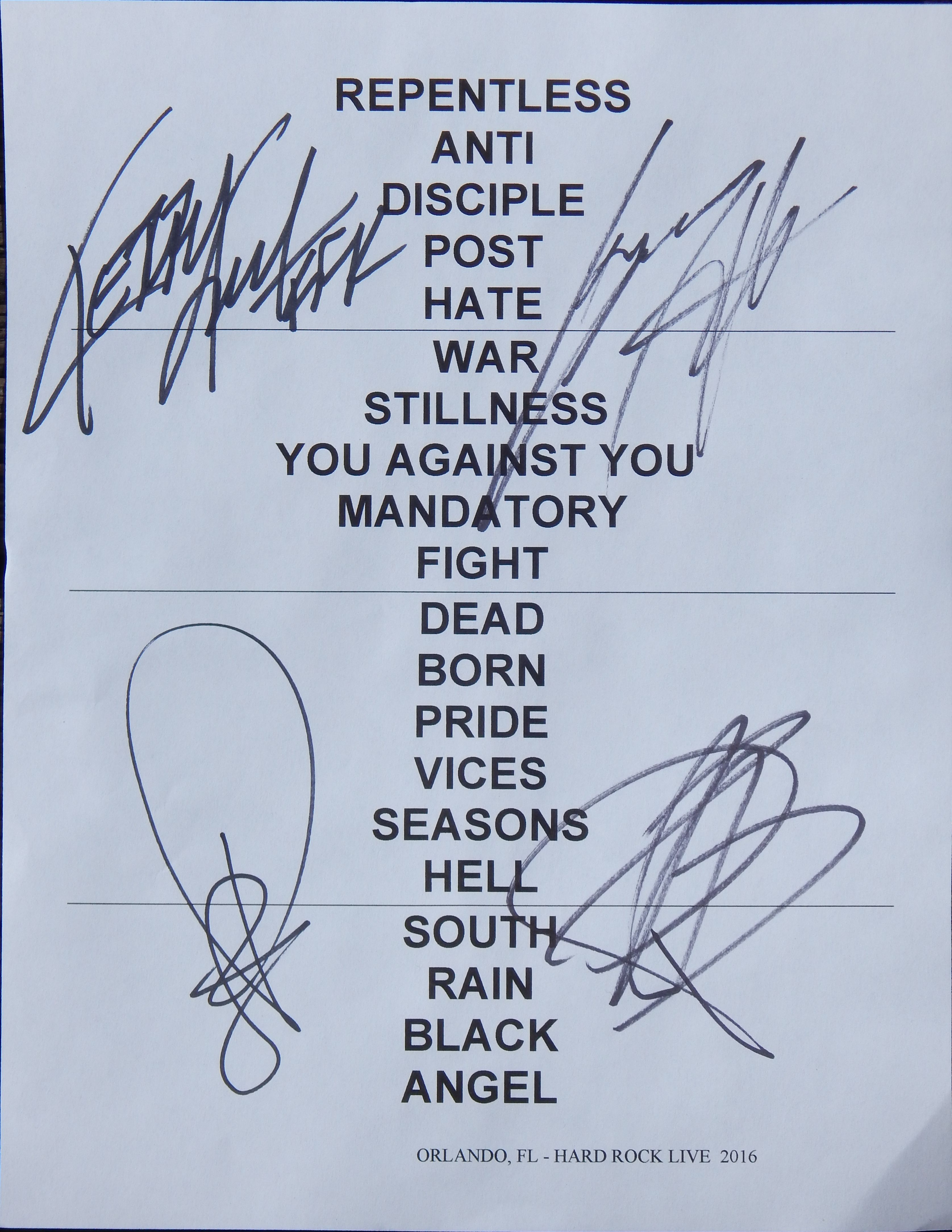 As a long time Slayer fan I can tell you that purchasing a ticket upgrade and attending their sound check was about the second coolest thing I have ever experienced in my concert going history behind going on the Motörhead Motörboat cruise last year. I had some reservations after spending what I did for the upgrade as leading up to the show I saw videos from other stops on the tour where those that also upgraded their ticket posted video and it was not the entire band that was out for the sound check, instead a couple times the guitar tech for Kerry King was the one playing. This day to my elation it was the godfathers of thrash metal themselves out and lightly chatting with the small group of us dedicated fans in attendance (maybe 40 people) and just jamming away right there literally three feet away from us. If you can imagine how loud a Slayer concert is, well for the sound check just imagine the volume at full show level when the venue is empty of people – it was gloriously deafening. The band checked for almost an hour and played us some classic Slayer tunes that do not usually come on the set lists. I was able to get some amazing pictures and without a doubt the autographed items I got with the upgrade are now the pride and joy of my music memorabilia collection. Death Angel absolutely killed it with their set, these guys freaking rock! To say that the pit for Death Angel rivaled the ones for Slayer would not be an understatement, as their music just has this riled up brutality within it and played live they just made the crowd go wild. There were some definite long time hard core fans of theirs in attendance and even though they have been around for many years this was a band that going in I was not very familiar with but they have for sure gained a new fan after seeing them live. On this I specifically remember from their set was when lead singer Mark Osegueda addressed the crowd in between songs, he said “We’re Death Angel, we play thrash metal and we’re f*cking proud of it” which of course received a huge response from the crowd, myself included and an even larger pit opened as the band started into their next song – so freaking metal! Anthrax was up next and this was my tenth Anthrax show and second time seeing them this year. This is a band that has seemingly only gotten better over the years, their live, high energy shows are simply incredible as each member has their own charismatic interaction with the crowd and are having just as much fun playing as the fans are watching. I especially liked that they played a bit of a heavier set than other times when I had seen them. I wished they would have had more than an hour slated while they were on that heavier roll, but alas we were still treated to two of their new tunes and seven classics so there is no argument from me from the set they played. There was much anticipation in the air as the lights dimmed when it was time for Slayer to hit the stage. They crowd was already chanting: SLAYER, SLAYER, SLAYER….as soon as the stage curtain with its giant white crosses that turned blood red and upside down dropped and that thunderous wall of sound hit us as the band started with the title track from their new release ‘Repentless’ it was full throttle thrash metal for an hour and a half as Slayed played a total of twenty songs. Slayer has been playing for over three decades, and they sound as good as ever. Mixed in the set with their timeless classics going all the way back to the ‘Hell Awaits’ release I was pleased when they played their newest single release ‘Pride in Prejudice’ which is just an absolute masterpiece of heaviness. These guys show no sign of slowing down after all these years in their performances and the fury that goes into them. Counting the sound check earlier in the day this was my tenth time seeing Slayer and without a doubt they are amazing to see live, there is nothing like a Slayer concert in its metalness, brutality and comradery among the metalheads, young and old, in attendance. There are not many years left in Slayer’s future as everyone is over 50 now, in fact the band has already said probably one more release and they will call it quits after more than thirty five years so if you are a fan and have never seen these guys play live find a way to go and experience them at least once. This show completed an unintended metal quest for me in that this calendar year I was fortunate enough to see all of the ‘Big 4’ thrash metal bands; Anthrax, Megadeth, Metallica and Slayer. A journey that totaled over six hours of air travel and nine hours of road trips, I traveled close to 2000 miles for this metal endeavor. \m/

When the Stillness Comes

Seasons in the Abyss