Runnin’ With The Devil: A Backstage Pass to the Wild Times 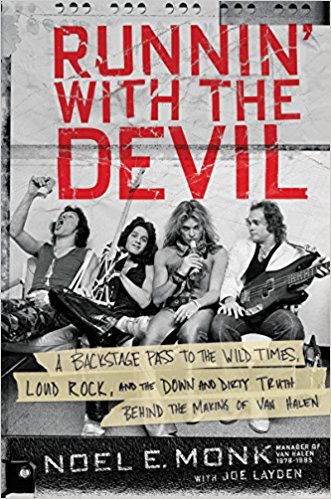 Noel Monk managed Van Halen from 1978 – 1985, the biggest rock band in the world during that run. And while he was ultimately fired from the band and cut out of millions of dollars, he certainly left the gig with a slew of stories, funny, sad and salacious. Thanks to a 30-plus year NDA agreement that has recently run out, he’s now able to channel the best of those stories into Running’ With The Devil, a wildly compelling read about a band that has certainly earned its reputation for being both great musically and atrocious on a personal level.

Monk was originally brought on to be the band’s first road manager by a friend who had just signed the foursome to Warner Brothers, (a particularly lopsided contract that Monk would help the band beat once he was signed on as their official manager). Having just worked on the infamous Sex Pistols’ U.S. tour, Monk figured he could easily handle working with four laidback California kids. After a couple of years with the brothers Van Halen and David Lee Roth, Johnny Rotten and Sid Vicious seemed like choir boys in comparison.

The only band member Monk has praise for throughout the book is bassist Michael Anthony. Though Monk admits he didn’t have the musical talents of an Eddie Van Halen, he was competent enough and always a sweet, affable person who regularly, inexplicably (aside from simply being the nice guy) served as a target of his band mates’ cruelty.  At the height of their popularity the Van Halen brothers and Roth allegedly made Anthony sign a contract saying he would no longer get an equal split of the band’s royalties (future and past), essentially making him little more than a salaried player-for-hire. Roth, as has been detailed many times before, is described here as the opportunistic egoist; Eddie is an emotionally stunted basket case. But, it’s drummer Alex, big brother to Eddie, who seems to get the harshest treatment, described throughout as simply a mean drunk who bullied those around him.

It would be easy to dismiss Monk as just another disgruntled former insider with an axe to grind after his firing. But he is hardly in the minority when it comes to detailing bad experiences with the band. Even if you were never a fan of Van Halen, (or more likely, because you were never a fan of the band), Runnin’ With The Devil is a fascinating look into the backstage life of a group that was at one time on top of the world, before their personalities caused it all to implode.

Runnin’ With The Devil: A Backstage Pass to the Wild Times, Loud Rock, and the Down and Dirty Truth Behind the Making of Van Halen