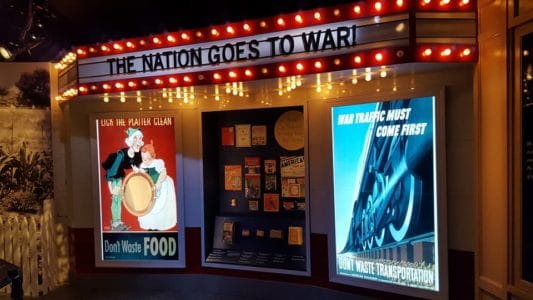 We were lucky enough to make it down to the New Orleans area a few months back and were able to see the Superdome, Bourbon Streets, and the French Quarter. Something we were not tremendously familiar with before our trip was the National WWII Museum. We were lucky enough to be invited into the museum before we began our trip back to SW Arkansas. The different exhibits will keep visitors interested no matter what sort of interests that they may have. For example, I am a big fan of the variety of Youtubers opening up ancient rations, including Steve1989MREInfo and Nathan’s MRE; the museum has a number of distinct pieces of military rations that were provided to our servicemen during the war. The wife and I like collecing mid-century modern cookware and household goods; the museum has a number of rooms that are set up in a fashion similar to what one would walk into should they be transported into 1942. Other highlights during our trip to the National WWII museum included a temporary exhibit that showcased the contributions that Louisiana made during the war. While many scholars at all educational levels will be familiar with what the citizenry of the states did in the aggregate, going a bit more into detail (through information and personal ephemera) is something that will allow not only those from Louisiana but from the Ark-La-Tex and the south generally another way to connect to an event from our not-so-distant past. The docent that was present in the US Merchant Marine Gallery provided a ton of information above and beyond what was present in the exhibit, which identified the integral role of the service in assisting the rest of the armed forces. Each of the exhibits at the museum works at a variety of levels. One can easily understand the visual side of things or can take a more pensive and thoughtful exploration of the different sources of information that are presented throughout. The Road To Tokyo is a fantastically ornate exhibit that is paired with the Road To Berlin exhibit to show the multitude of ways in which soldiers fighting in each area different in their experiences. Different enemies, methods of fighting, and gear (including a flame-thrower) are present in the Road to Tokyo exhibit.

Expect to spend about 3-5 hours at the Museum. This time will increase further should one take advantage of the different films or events that are occurring at the museum that day. We took our toddler with us and felt that we still missed a good portion of the depth of the attractions at the museum;  even if many of the exhibits are similar a few years from now, we still feel that there is still a ton of information that we’ll pick up on a second go-around.

Tickets are $27 for adults, $23.50 for seniors 65+, and $17.50 for military and college students with ID as well as school-aged children. Children under the age of 5 are admitted free. The website has a tremendous amount of information about each of the exhibits and contains links to other related events, including the Beyond All Boundaries 4D film, which is hosted by Tom Hanks along with a tour of the USS Tang.