The Clash: All The Albums, All The Songs 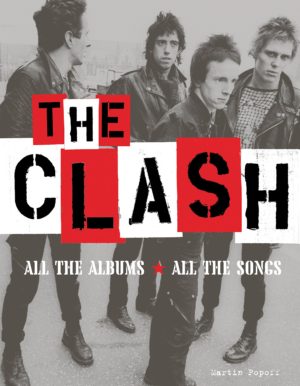 The Clash’s record label once dubbed the group as “the only band that matters” in the promotional materials introducing them to the U.S. and while the phrase was certainly polarizing at the time, you can’t help but find their influence stronger today than ever before. Whether it was adding strong, sing-able melodies to punk rock – heard in bands like Green Day and every Green Day clone since; their strong political lyrics, since adopted by everyone from Bad Religion to the Manic Street Preachers; or their mix of ska and Reggae to punk rock on their second and third albums, pretty much handing Rancid their musical template, The Clash is just as relevant 30 years after their demise.

Martin Popoff, who already has a bookstore’s worth of tomes about heavy metal under his name, lends his conversational writing style to The Clash with this latest book. Breaking down every single album and song the band created in their 10-year lifespan, chapter by chapter – each focusing on a different record – Popoff fills in the few cracks still left of the band’s lore despite a slew of other great books already out there around them (most notably in that cannon, Joe Strummer’s fantastic memoir). And while Popoff’s not afraid to share his bias – something that may bristle a few of the punk rockers who have strong opinions about what Clash albums are above reproach – there is no denying that he knows his Clash history. By the way, he is dead on trashing the final Clash album, “Cut the Crap” (which, as he states, is not recognized by many as a Clash album as it only boasts two original band members) with its mediocre songs and dreadful reliance on drum machines.

Popoff fills out the book with some intriguing sidebars, including an interview with Sandy Pearlman, the producer of The Clash’s Give ‘Em Enough Rope as well as a long-time producer/collaborator with Blue Cheer. There’s also a great section devoted to Mickey Gallagher, a member of Ian Dury and The Blockheads, and sometime Clash collaborator.

There’s a slew of color photos of the band here, as well as pics of old flyers and band promo items crammed into the book. The Clash: All The Albums, All The Songs is an obvious must-own for Clash fans, but a great read for overall music fans as well. The only band that matters, indeed.

The Clash: All The Albums, All The Songs by Martin Popoff/Hardcover, 240 pages/Voyageur Press/2018