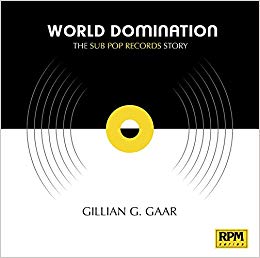 You’d be hard pressed to find a recent musical genre that’s been dissected more in the past two decades than Grunge. Countless books, articles, documentaries, and radio and TV interviews dig into the Seattle-based phenomenon and just about every single discussion on the topic eventually comes around to the ground-breaking indie label Sub Pop. So, it’s surprising there was any new material left to report about the label, let alone an entire book’s worth. But, Gillian G. Gaar manages to find plenty to cover in this latest book about the label.

World Domination is the first in a series of books focusing on independent record labels. Through interviews with the label founders, Bruce Pavitt and Jonathan Poneman, as well as plenty of former and current employees and bands affiliated with the label, Gaar tells a comprehensive story of the label that’s seen its fortunes and focus ebb and flow over the past 32 years. To the author’s credit, she doesn’t shy away from the controversies – the bounced checks, fights between Pavitt and Poneman as well as some of their boneheaded business decisions – but the bulk of the book focuses on the duo’s earlier lives before meeting up in Seattle and their knack for homing in on a uniquely Northwestern sound, mixing Metal with Classic and Punk Rock and bringing that sound to the rest of the world.

The book-buying public can decide for itself whether the world needed another book focusing on the Ground Zero of Grunge, but it’s hard to argue there’s been a better one in the past few years than World Domination.