Teen Movie Hell: A Crucible of Coming-Of-Age Comedies From Animal House to Zapped! 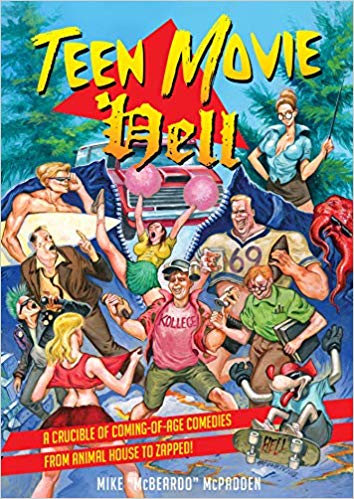 Given today’s current sensitivities around, well, just about everything, it’s hard to image even a third of the movies profiled in Mike McPadden’s fantastically entertaining encyclopedia of teen comedies, Teen Movie Hell, ever being made. But for those who grew up in the ‘80s trying to catch a glimpse of nudity via scrambled cable movies on channels you didn’t subscribe to, or their slightly more watered down cinematic siblings on basic cable shows like USA’s Up All Night, this book serves as the bible of raunchy comedies we never knew we needed until now.

McPadden and his contributors take an almost scholarly approach to dissecting the appeal of these mostly-low budget T&A filled comedies. Though they reach back to the 1960’s to start the evolution of these movies, the bulk were gifted to us via Ragan’s greedy Me, Me, Me era of the 1980s. The majority of Teen Movie Hell is made of an alphabetical listing and review of the most seminal and in some cases, under the radar also rans – of teen-focused ranch coms, from 1988’s After School (aka Private Tutor: Return to Eden) to 1978’s Zuma Beach.

Sprinkled throughout are some positively impressive essays about the films from this era, specifically Kat Ellinger’s The Ellinger Code: Teen Sex Comedies in the Age of #MeToo and for All Eternity and the importance of abortion as a real topic being introduced to teens for the first time via Fast Times at Ridgemont High in Wendy McClure’s strong essay The Free Clinic Isn’t Free.

Teen Movie Hell is so much more than a guide to the golden era of teen movie raunch (although that’s definitely, thankfully a part of it). But it stands as a brilliant look at a different time from authors who were the prime targets of those movies, giving a part nostalgic, part cringe-worthy tour of a time period in cinematic history that will likely never be revived.