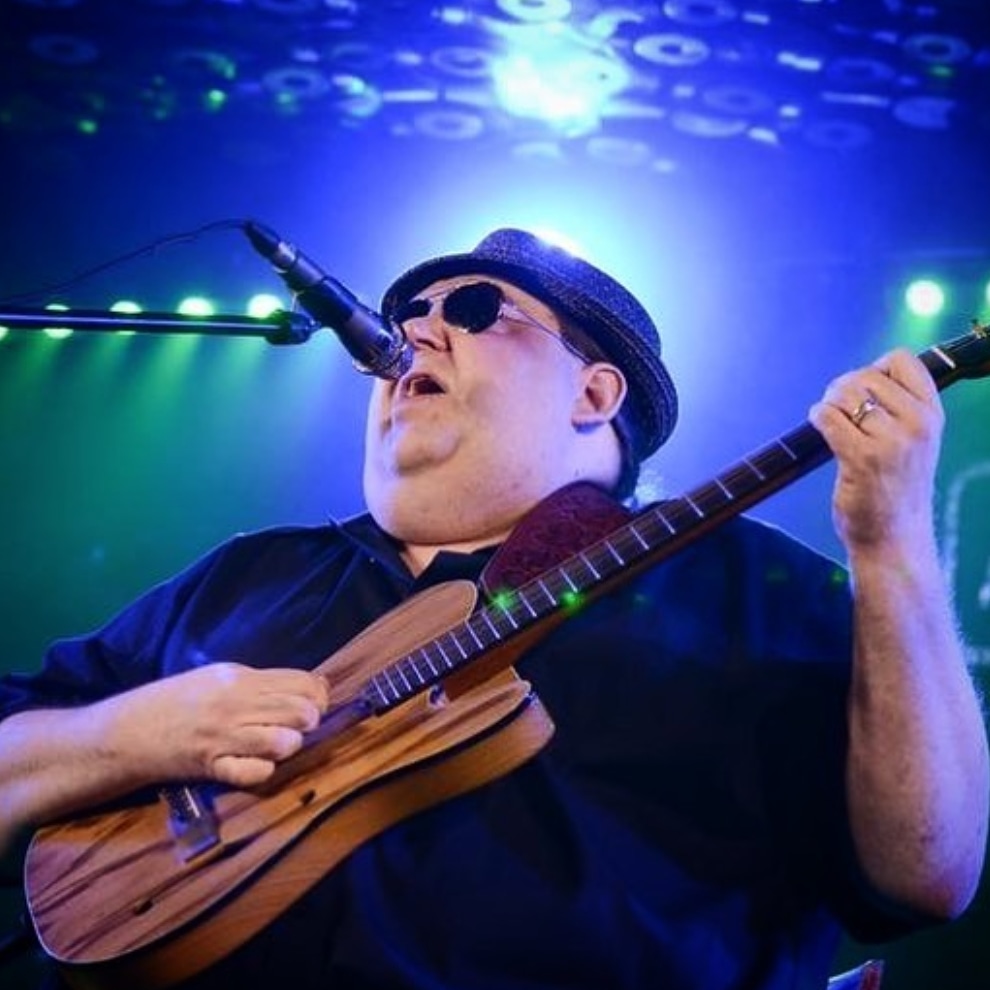 Hello Joey! So happy we could chat today. Can you walk us through your musical journey?  Give us the story of where you started and what is going on now for you.

Thanks for inviting me to chat!

I had a brain tumor when I was around 2 years old. I survived though most of the doctors didn’t think I would or if I did, I would never walk or talk.

Though the tumor took my eyesight and left me with a host of other health challenges that I still work daily to overcome, I have been able to make my life what I wanted it to be and have had a career in music that I am proud of.

While music has always been part of the Stuckey household, I honestly never thought of being a musician as a career as my early life was a daily fight to survive and go to school. When I was in school as a child there weren’t any of the specialized programs we have today to assist those with different needs, so I just went to a regular high school and toughed it out.

When I was 13 years old, I had pneumonia and had to stay in the hospital or at home recovering over the entire summer. I discovered old time radio shows, like “The Lone Ranger” and “The Shadow”. This was a revelation for a blind child as the stories were told through music, sound effects and dialog. And I thought, I can do this! I thought I would try to record sound effects for film and TV. So I went to the local Radio Shack and bought some primitive recording gear and started just figuring things out through trial and error. I should also say that the DJ that played those radio shows on the local public radio station became a mentor for me and taught me what he knew. His name is Rob Tomas and I’ll never forget him or be able to thank him enough!

From there, I got my first job at 15 as the sound tech for the local planetarium. Other young people that also worked at the museum heard I had some recording gear and started asking me to record their garage bands. I did and within a few years I had moved out of my attic and into a real building and started a real studio.

Around the same time, I realized that music was the vehicle that I could use to tell my story and so I started taking guitar lessons. And that was that! I have never had another job except for recording sound and music and I am so grateful!

Right now, I am winding up the tour from the 2019 album “In The Shadow Of The Sun” and finishing up the radio campaign for my Christmas EP “A Santa That Plays Guitar”. I am also getting ready to plan our tour schedule for the summer of 2020 along with starting on a new studio space which is going to be a true distination studio. You can follow our progress by visiting www.shadowsoundstudio.com.

We are already starting off 2020 right by performing on January 3rd at Whisky A Go Go in LA on the Sunset Strip. I will also be back in LA durring GRAMMY week performing and hanging out with other amazingly talented creatives.

You have accomplished so much in your career, what big dreams are you chasing next?

Well, I have to say I would like a GRAMMY—LOL. But mainly I just want to be of service to artists that need a place to record and be nurtured as they start their careers! I take pride in being that studio and producer/recording engineer. I would also love to work on some bigger projects with some of my heroes, like Paul McCartney or Neal Finn, Ellie Goulding and Bruno Mars, just to name a few!

I also have a host of venues I would love to play like Carnegie Hall, The Cavern and so many more. But I am checking one of those off my bucket list—as I mentioned the band is performing the Whisky A Go Go this January 3rd of 2020!

If you were given a one-minute ad slot during the Super Bowl, what would you fill it with?

No doubt it would be something silly! If you haven’t had a chance, check out my video for “Blind Man Drivin’” and you will get what I mean—LOL. Here’s a link for that video: https://youtu.be/hkhLDuMj2t0.

I would probably fill the spot with some of my favorite personalities as well— mainly so I could sit down and chat with them. I admire so many folks and would love to just hang out and have coffee and wax philosophical about the universe, Michio Kaku, RuPaul, Rachael Maddow, Iliza Shlesinger (who I have met), Eddie Murphy, Chuck Rosenberg– people like that!

Things have changed so much the past 10 years, tell us how do you think the industry will change over the next decade?

A lot of new things are on the horizon. With ATMOS and 5G networks, we will see a lot more power with streaming very high res content. This will most likely become ubiquitous around 2024 or so.

The “Utility Model” of streaming is almost here. In 2018 and 2019 we saw the first increase in music revenue in some time and it was all due to streaming. Downloads started to decline for the first time since they came on the market. Now that you have Amazon and Tidal offering 96/24 streaming of music, I think you will start to see a lot more of that, which is a good thing for while MP3’s are convenient, the fidelity isn’t great.

Now you will still see a few folks buy CD’s as part of boutique boxsets that also include vinyl and Blu-ray. But I think we’ll start to see fewer physical products for music.

The only caveat for that is that people will now see vinyl and CD’s as souvenirs of being at one of your live shows, especially if you sign it for them. Just remember, what is old becomes new again in about a decade or so. We all thought vinyl was dead and gone forever but it has come back with a vengeance and there is even a slight resurgence with cassettes, but GOD knows why!

Streaming is going to change the music business for sure, but if we can get streaming royalty rates up, it is probably for the best.

Tell us what you do best? What sets you apart from other artists?

I think I am best at bringing out the best in others as a producer and engineer. As an artist, I think my best quality is honesty. I tell the truth as I see it even when I don’t like the answer I get when I ask myself the hard questions. This honesty and willingness to be vulnerable give my art greater accessibility because the listener knows they are part of my journey and they can relate part of my life to their own and perhaps find greater truth for themselves.

Do you have any dream artist that you would like to write a song with? If so, why?

Again so many greats! I would love to write with artists as diverse as Willie Nelson, Dolly Parton, Bebe Rexah, Adele, BT and Tory Amos. The reason is simple, I am a fan of their music and I am also a professional writer and composer, so it would be fun and maybe even make some money LOL!

Where can we catch you online to follow and support you?