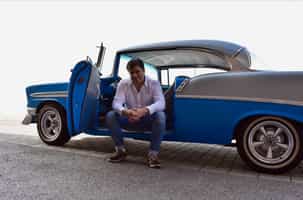 Tom Tikka is and has always been a natural storyteller with the release of his newest EP That’s What Winston Churchill Said. With a majority of these songs written over the course of his life (the ending track “A Good Thing Going On” was written when Tikka was 18,) its clear why Tikka has remained in music and garnered as much acclaim as he has both solo and with other collaborators. Tikka isn’t afraid to confront serious subject matter. The album begins with the powerful and captivating divorce ballad “Turn Back the Time” where Tikka sings about his real life divorce with devastating lines like “I allow myself to weep after you have gone to sleep” even bringing his kids into the mix about what a messy process it all is.

What separates it however from your average breakup song is that no particular finger is pointed rendering the song even more powerful as there’s sometimes no greater heartbreak one can feel than when one day you just realize you don’t love the person you’re with anymore. It’s very clear across these songs that Tikka acting as the narrator of this journey wants a sense of affection and warmth and the losses hit hard such as in the follow up track “All She Wants is You” detailing a relationship derailed by the inclusion of someone else. It never devolves into a pity party and Tikka flexes a lot of restraint and self awareness keeping these songs from becoming rote or cliche.

Tikka even turns attention away from himself with the fantastic “Mary Mattered” taking the feelings of doubt and the longing to be understood and loved and repurposing them in a sound that wouldn’t feel out of place in the late 90’s/early 2000s pop punk or alternative pop sounds of that day. “Mary Mattered” has the most devastating use of the words “Love me” that I’ve heard in years. Little flourishes add to the personality each song is also oozing, with inspired uses of organs on “Turn Back Time”, distorted echoes on the aforementioned “Mary Matters” and a fantastic sample of Winston Churchill’s now famous speech that inspired the titular track in which Churchill proclaims that even if you’re in hell, keep going. In a way the EP starts off as vibrantly bleak but with a sort of “oh well” cadence to it all. Tikka never comes across as mad in these songs, but more-so tired.

Tired of empty promises and the disappointments that permeate in our world. One of the best tracks “Jaded Mind” exemplifies this best while condemning not just generational differences in aspiration (“my generations ruled by screens, the past ones went to mars”) but the general content many feel without pushing back and searching for more. Its obvious Tikka has experienced some remarkable pains, but even with the closing track “A Good Thing Going On”, he finds a way to make it all matter for the little moments. It’s a brilliant and inspired start to an uncertain 2021.